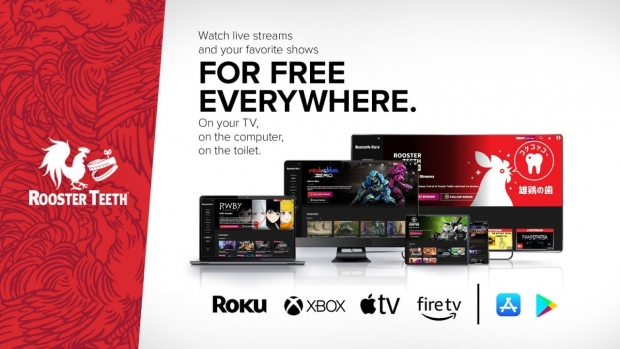 AUSTIN, TX -- WarnerMedia’s entertainment and media company Rooster Teeth has launched on Roku and Amazon Fire TV, and updated Xbox One and Apple TV apps. Fans can now experience all of Rooster Teeth’s gaming and animation videos for free from their living rooms. All four apps will include new features like RTTV, the home for Rooster Teeth’s daily live streams, and a “My Library” feature that lets users save a “watch later” list and playlists.

Watch a trailer for the apps here!

In RWBY Volume 8, our heroes’ worst fears have finally been realized: Salem is here, and the timing could not be worse for the divided Kingdom of Atlas. Fear has turned friends into enemies, while doubt threatens to splinter humanity’s remaining allies. With both Salem and Ironwood stacking the odds against them, and the fate of Remnant at stake, it is up to team RWBY to make their play before it is too late.

Red vs. Blue: Zero delivers a brand-new take on the fan-favorite show. A mysterious syndicate leader known only as Zero seeks an ultimate power, and a ragtag team of heroes and misfits called the Shatter Squad must work together to save the galaxy. Torrian Crawford, the animator behind the hit web series Death Battle! and gen: LOCK, steps into the role of showrunner and lead animator this season, and Achievement Hunter member Fiona Nova stars as the lead character, Agent One.