Bjørn Blaabjerg Sørensen, graduate of The Animation Workshop in Denmark, explains how his team brought a unique claymation aesthetic to their CG animation. 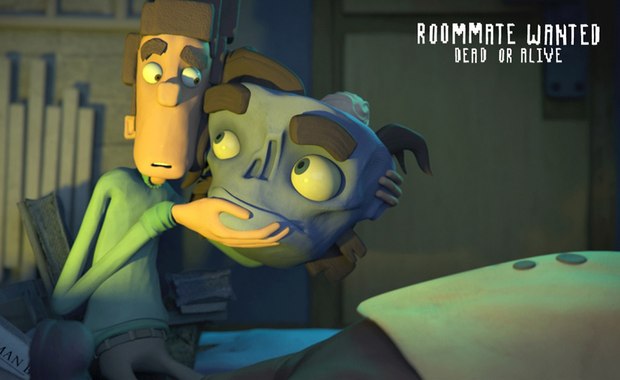 Everyone can relate to the story of the roommate from hell. They’re usually either too messy, or too tidy, and the fact that you have to spend most of your quality time with this person only makes matters worse. But what if your roomie is actually a zombie?

That’s the pitch of Roommate Wanted, a short graduation film from The Animation Workshop in Denmark directed by Lærke Kromann and co-director David Crisp. In this gleefully deranged dark comedy a straight-laced medical student takes on a member of the undead as a new flatmate. But its stop-motion modelling clay aesthetic is just as striking as its odd-couple plot.

“None of us had been trained in stop motion animation, so we felt more secure making it CG,” explains Bjørn Blaabjerg Sørensen, the film’s technical director and character technical director. “It seems crazy, but it was easier to make CG characters than real life ones with armatures in them. Director Lærke liked the feel she got from stop motion, so the challenge for her was to try to achieve that through CG.”The stop-motion technique Roommate Wanted apes is notorious for its painstaking intricacy and long production times, though. To ensure they wouldn’t have to spend the rest of their lives making the film, the team cheated a little, employing a blend of CG and real items to economize the production.

This approach required a completely different production cycle to a standard CG project. The backdrops were created first, to be photographed and retopoed in Maya, giving the animators something tangible to work from. This took up the pre-production phase, and it was a time-consuming process.

“First of all there was design, after that we had research how to work with different materials, and how we could make a surface look like concrete, for instance,” says Sørensen. “It turns out that spraying isolation foam with grey spray colour erodes the surface in such a way that it looks like concrete wall at a miniature scale. There was a lot of trial and error involved -- there is no ctrl+z command for real life. But I can proudly say that I built Adam's desk and painted his cactus green, among other props.” Once the physical set was recreated within the confines of a computer, CG characters and props were added, again based on items created in the real world. Despite their rendered nature they created problems of their own: misaligned shadows or wonky reflections would immediately break the illusion of Roommate Wanted’s sculpted clay realism, so the team had to ensure all these elements were aligned perfectly.

“To make it look convincing we had to very carefully match light-catching geometry up to each shot background after extracting the CG camera from Nuke,” says Sørensen “We blocked out the lights with V-Ray IPR. Once light angle, colour and mood was in order, we rendered our shots with grey shaders to see how light, characters and background would behave together, and from there we were able to further art direct and adjust the lights.” Bjorn even went to great extremes to make sure the models looked as convincingly hand-crafted as possible. “I created a V-Ray shader that would shuffle the fingerprint bump maps on the character at a seemingly random frequency,” he says. “It wasn’t random though, but baked onto an animation curve in order to work on the renderfarm. This was fun and a good challenge.”

The eight-person team behind the film are proud of the finished product, but they’re equally pleased with the way they came together and worked together. Everything was planned down to the minutest detail, a wise move as they were able to use scripts to automate the process and have the film ready way before its deadline, giving time for tiny tweaks and corrections.

As well as providing a great testbed for the team’s animation skills, Roommate Wanted marked the culmination of Sørensen’s training at The Animation Workshop. When he started he had no knowledge of 3D or CGI, but by the time he finished he was baking bump maps onto an animation curve.

“I learned more at TAW than I could have ever dreamed of, and I did so through all the professionals that the school brought in every week to guide us through the curriculum,” Sørensen says. “The Animation Workshop is an amazing and supportive place, and they guided me all the way from beginner to the professional I am today.” “Even though you go back to subdivision level one of a model that you sculpted on, at least in ZBrush the base mesh is altered slightly,” Sørensen says. “It’s a good approach to grab that mesh after the fine sculpt has been done, just to make sure that the model will fit  the exported displacement maps.”