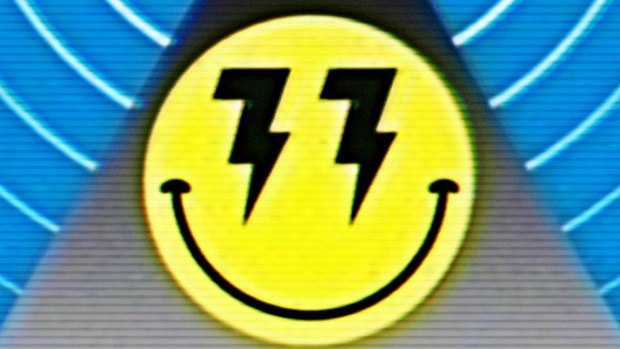 LONDON -- When it comes to providing concert visuals, Trunk has an impressive client list that includes Elton John, Take That, Keith Urban, Coldplay and Madness (for the Queens jubilee on Buckingham Palace). Their latest collaboration is with international super DJ Bingo Players, allowing them to create work for the fast 110 – 150 B.P.M world of electric dance music. Bingo Players approached Trunk to make a body of animation that could be mixed by their VJ Pat Jagla during Bingo Players live set. An initial brief from Ted Lovett’s studio in L.A. outlined the concept of a “Yellow Takeover” that evolved from Bingo Players trademark acid house smiley face logo with lightning bolt eyes. The concept had the yellow from this logo spread outsides the confines of the circular logo and infect the surrounding environment, metaphorically spreading Bingo Players reach. This also mirrors the expansion and acceptance of electronic dance music within the wider world.

The main concept of the “Yellow Takeover” was presented as five distinct stories or chapters by the creative’s at Trunk. Two feature Op and Pop Art. Two comprise fast edited news clips and gifs interspersed with Bingo Players logo spinning, swooping, flipping and pulsing to the beat akin to an 80’s TV channel ident. While the final one features, in Rok’s words, “…a slick 3D version where a cool yellow liquid covers and envelops a mass of shiny black shapes in close up, all of which only become apparent when the camera pans out.”

For the first time Trunk worked with Pablo Balderas, his editing skills lent a fresh perspective and different energy to the work.

Producer Richard Barnett commented, “It was great working with Ted and Pablo on this project, we loved Ted’s concept and had great fun fleshing out the ideas he presented to us while Pablo’s editing really captured the frantic pace of European or electric dance music”.

All the videos were created in After Effects and Cinema 4D by a team of animators at Trunk. From initial concept to finished animations took a fast paced 4 weeks. In total a 35 minutes worth of animation was created. This included 15 minutes of unique content and an additional 20 minutes of loops that Jagla would be able to mix and drop into the set to match the energy of the music. Bingo Players live performances are noted for their heart racing, fist pumping and body popping joyful atmosphere and the finished visuals Trunk created perfectly matched their style and approach.