Roger creates comedic promos that blend live-action and animation in a new teaser campaign for Chozen, the new animated series on FX which premiered on January 13th. 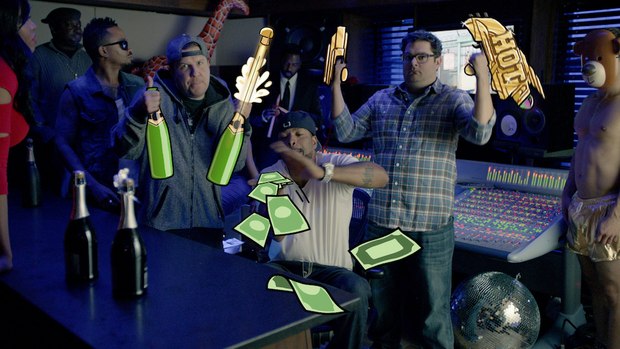 Mixed-media production studio Roger recently lent its animation and comedic chops to a launch teaser campaign for Chozen, the new animated series on FX, which premiered on January 13th. Bobby Moynihan, an SNL cast member, voices the title character, a gay white rapper who’s fresh out of prison and trying to reclaim his rightful position as the world’s best rap artist.

These comedic promos use a blend of live-action and animation that work together to tell and sell each joke. In Bubbly, Bobby Moynihan, along with cast members Method Man (who identifies himself as actress Ashlee Simpson) and Nick Swardson announce the upcoming animated series as random cartoon objects crop up: angel wings, flying cash, explosive champagne bottles, a lobster with a hat on, and even Moynihan’s mom’s house. In another promo, Moynihan completely transforms into the cartoon character Chozen.

The concept of the campaign was to highlight the star talent behind Chozen and to give audiences a glimpse of the cartoon's look and feel by employing the same aesthetics, animation style and personality seen in the actual show. FX tasked Roger with the role of enhancing the story of Chozen through the use of visual gags and animated transitions within the live-action promos. In addition, Roger provided on-set VFX supervision during the shoot in NYC.

“The actors were given direction on what they were pantomiming,” explains Terence Lee, Executive Creative Director of Roger, “such as Bobby [Moynihan] firing off invisible guns in the air and Method Man making it rain with an invisible stack of bills. From there, we had fun figuring out how the guns looked and how the money flew everywhere. On top of illustrating their actions, we threw in a few extra things like angel wings and lasers because you can never have enough. We used some of the Flash assets provided by the client, but we also created a library of our own artwork to throw into the mix.”

The challenge for Roger was making sure its original artwork looked like it belonged to the show, down to the smallest details, strokes and movements. The artists created all of the transitions, frame by frame in Flash as traditional cel animation, combining the filmed live-action with the cartoon Chozen world. Employing an arsenal of Wacom pens, Adobe Flash and After Effects, and plenty of elbow grease, Roger was able to tweak the animations quickly and precisely.

“When we received the briefing and show pilot from FX, we immediately fell in love with the project,” concludes Costa. “After we shared our initial design ideas with the team, everyone was excited. We had a great time supervising the VFX on-set in New York. The show’s premise is hilarious, so it was fun for us to dive into the spots with the same vibe and enthusiasm.”