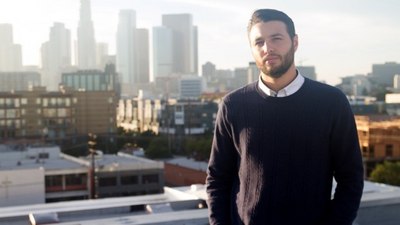 Los Angeles, CA -- Mixed-media production studio Roger continues its mission to grow its senior leadership by welcoming Dane Macbeth as Creative Director and promoting Producer Brandon Stevenson to Head of Production. The appointments come as Roger continues expanding its creative footprint in broadcast while adding content creation to its menu of services.

“Together, Dane and Brandon embody how Roger strives to not only recognize and attract great talent, but also foster it from within,” says Terry Lee, Founder/Executive Creative Director of Roger. “With Dane, we have more creative firepower than ever before; and Brandon has been primed to do great things as well with his strong production skills and invaluable understanding of the Roger ethos, top to bottom.”

“Roger is more than just a company, it’s a family,” remarks Macbeth. “I can't wait to see what we accomplish together in the future as we continue to grow and diversify. A big part of that for us is to continue pushing the envelope and fine-tuning our craft, from pre-production to post-production.”

From design and animation to creative direction and art direction, Macbeth has assumed many roles contributing to award-winning and noteworthy projects: the main titles for X-Men: The Last Stand and Fantastic Four: Rise of the Silver Surfer; trailers for Spider-Man and Spider-Man 3; and network rebrands for Lifetime and Nickelodeon, among scores more film and TV clients. His lengthy list of advertising clients include BMW, Sony, Toyota, Honda, Burger King, and Xbox, to name a handful.

Macbeth says he was initially drawn to Roger after seeing its “Kids’ Choice Awards” promo for Nickelodeon, which featured host Jack Black and “just about every animation technique known at the time.” Fittingly, his first project with Roger was for Nickelodeon.

“From the first project at Roger to the most recent delivery, it’s been a non-stop, wild ride that has kept me on my toes,” says Macbeth. “We make great things and have fun while doing it, which perfectly matches my personality.”

For Stevenson, his promotion to Head of Production is indicative of the company culture he’s helped foster. He began his industry career at Roger, starting as an entry-level coordinator before moving up to produce smaller jobs. As the company grew, so did Stevenson, who has since produced many large-scale projects via Roger. His notable commercial jobs include campaigns for UTA and Constant Contact, among many other major brands; and Stevenson's broadcast resume includes the Lifetime network rebrand, as well as the “Chopper” and “SnoBots” promos for Disney XD.

“I’m looking forward to working with our clients on new and interesting projects while teaching and molding our support team,” concludes Stevenson, who embraces the role of mentor to the younger staff who are where he was when his career started. “The entire team at Roger are more than co-workers, they’re truly my friends. They’re the reason I’ve been invested in the company for so long, and when you work with people who you enjoy spending time with, it makes for a more welcome, collaborative and productive environment where you genuinely want to come in and work.”