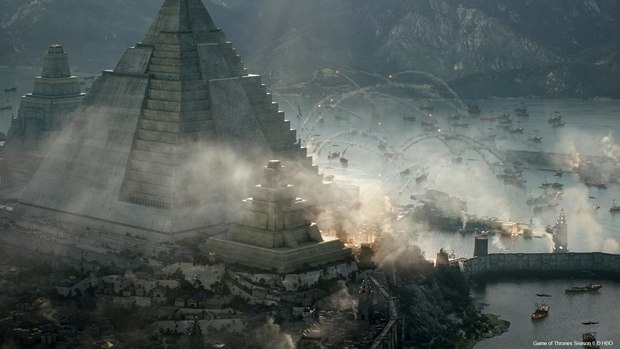 MONTREAL -- For the third consecutive year Rodeo FX has won an Emmy Award for Outstanding Special Visual Effects on HBO’s Game of Thrones. The VFX studio won the award for its work on “Battle of the Bastards,” the ninth and perhaps most memorable episode in Season 6.

Matthew Rouleau, CG supervisor at Rodeo FX, shared the award with HBO’s VFX supervisor, Joe Bauer, and VFX producer, Steve Kullback, among others. The Creative Arts Emmy Awards ceremony was held this past Saturday at the Microsoft Theater in Los Angeles.

“We are honored to have our work on Game of Thrones recognized with an Emmy for the third time,” said Sébastien Moreau, president of Rodeo FX and VFX executive producer on Game of Thrones. “Each year the depth and quality of the visuals becomes greater, demanding that we up our game. Season 6 was our most challenging, and rewarding, season yet.”

“Battle of the Bastards,” for which the studio won its Emmy, culminates in the attack on Meereen from a host of ships in the harbor. In addition to the fully CG city, Rodeo FX simulated flaming cannonballs catapulted into Meereen’s buildings, created CG smoke, particles, sails, water, and fire. Digital matte painting of the sky, mountains, and cliffs completed the scene. The studio’s expertise in crowd simulation was used for the sequence during which the Dothraki Horde rides into battle at the gates of the city and includes a CG decapitation.

“Episode nine really is spectacular,” Rouleau said. “It’s the realism of the battle scene that draws the viewer in, allowing them to suspend their understanding that this isn’t real.”

“Once again, I congratulate our team at Rodeo FX and thank them for their dedication to creating cinematic quality visual effects for this TV show,” added Moreau.