Rodeo FX Brings Creatures to Life in ‘Jumanji: Welcome to the Jungle’ 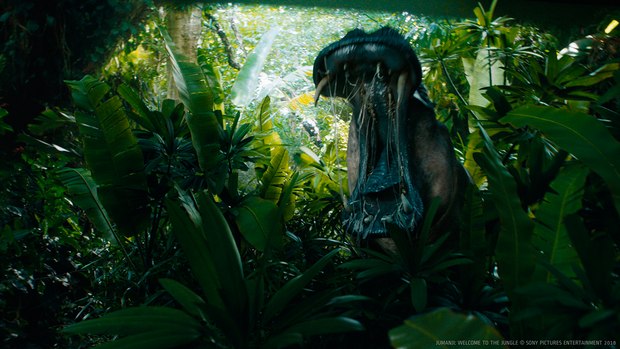 MONTREAL -- Rodeo FX created 96 shots for Jumanji: Welcome to the Jungle, including some of the most iconic creatures in the movie.

The sequel to the 1995 family classic takes the story of a board game that’s come to life and brings it to the digital age by transforming a group of teens into avatars and trapping them inside a video game jungle, where the only way out is to beat the game. To help create an alternate game world, Rodeo FX’s creature expertise was brought in. “Director Jake Kasdan wanted the creatures to feel cursed so our team held back from making them too realistic” said VFX Supervisor Alexandre Lafortune, from Rodeo FX. “The Hippo is a great example of a creature that would have appeared scary if we had made it look real, so we made it bigger and faster and changed the pink flesh in its mouth to black. These changes make the Hippo fit in with the comedy.”

The studio’s shots for the film feature a range of creatures, as well as matte paintings and environments. Rodeo FX worked alongside the film’s VFX supervisor to deliver the director’s vision for the star-studded film.

“It was a pleasure to collaborate with Rodeo FX on this film” said Jerome Chen. “I relied on Alexandre Lafortune and his team to help us with sequences requiring full conceptualization and execution from start to finish. Alex and his team’s artistic abilities raised the quality of the imagery in our film and we are grateful for their participation.” Chen entrusted Rodeo FX with the Hippo and other key creatures, including the Black Mamba snake that engages Bethany, played by Jack Black, in a staring contest. The snake was created by Rodeo FX based on a puppet used on set by the actors. Rodeo FX used a 3D scan of the prop and brought it to life in CG, making key adjustments to its appearance, including coloring and mouth shape. The VFX studio also delivered shots of a scorpion, crocodiles, and of a tarantula and centipede that complement the sinister tone of the film’s villain. Rodeo FX’s creature work includes It, The Legend of Tarzan and the upcoming Paddington 2.

Jumanji: Welcome to the Jungle is produced and distributed by Sony Pictures, and is now playing in theaters.