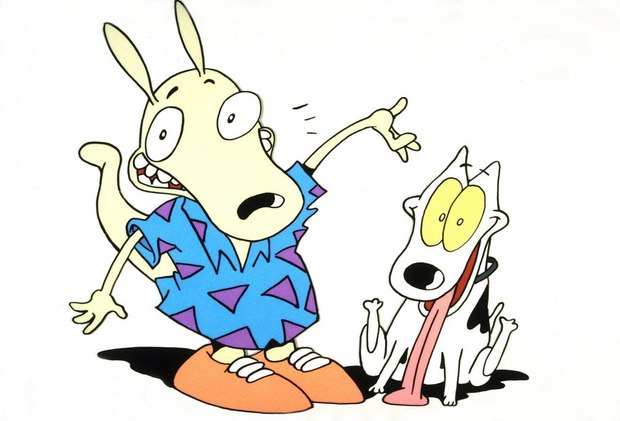 BURBANK, CA – In honor the 25th anniversary of their original creator-driven animation, Nickelodeon has announced another reinvention of its library content with the greenlighting of an original one-hour TV special based on its classic ‘90s hit, Rocko’s Modern Life. With Rocko’s original creator Joe Murray on board as executive producer, the animated Rocko's Modern Life TV special will bring back all the show’s classic characters and offer some surprising new takes on life in O-Town.

"I'm very happy to be rejoining Rocko and my friends from O-Town again,” said creator and executive producer Joe Murray. “What I have found by bringing these characters back is that it's not so much about nostalgia, but a sense that they still feel relevant and fresh to me, and after twenty years, they can't wait to comment on modern life in the 21st century. They still have a lot to say."

Originally airing from 1993-1996, the animated Rocko’s Modern Life follows the adventures of an Australian wallaby named Rocko and his two companions, Heffer Wolfe and Filburt, through their adventures in their home of O-Town. “Following our news about Hey Arnold! and Legends of the Hidden Temple, greenlighting a Rocko’s Modern Life TV special is another strong example of how we are bringing our library content back for both new audiences and the generation that grew up on them in the ‘90s,” said Chris Viscardi, SVP, Content Development, Nickelodeon Franchise Properties. “It’s a testament to the strength and appeal of these characters that so many people have loved Nick animation for these last 25 years, and we are excited to bring them back for new stories and adventures.”

Rocko’s greenlight news, 25 years since the original launch of the iconic Rugrats, The Ren & Stimpy Show and Doug, follows recent announcements of Nickelodeon bringing back its library content for today’s audiences. Coming in 2017 is Hey Arnold!: The Jungle Movie, a new, original TV movie that will feature a storyline picking up from where the original series ended in 2004, resolving unanswered questions and plotlines, including Arnold finally getting answers about the whereabouts of his missing parents.

This fall, Nickelodeon will premiere its Legends of the Hidden Temple original TV movie, an action-adventure movie based on its ‘90s game show of the same name. Drawing from the original show’s premise of kids competing to retrieve artifacts from a mysterious Mayan temple, the new action-adventure TV movie version will follow three siblings who embark on a high-stakes, life-or-death mission.

August 11 celebrates 25 years of original creator-driven animation for Nickelodeon, marking a significant milestone exemplifying decades of rich history and commitment to bringing fresh innovative content to kids and families around the world. Later this year, Nickelodeon will open up a 190,000 square-foot, state-of-the-art complex in Burbank, CA, to serve as the West Coast hub for the network, housing the ever-growing number of animated and live-action series, TV movies, and award shows and events seen globally.

Nickelodeon, now in its 37th year, has built a diverse, global business by putting kids first in everything it does. The company includes television programming and production in the United States and around the world, plus consumer products, online, recreation, books and feature films. Nickelodeon’s U.S. television network is seen in more than 90 million households and has been the number-one-rated basic cable network for 20 consecutive years.