Features will be budgeted between $15 million and $20 million, with ‘Goose Chase’ and ‘The Silk Road Rally’ -- both directed by Ross Venokur -- greenlit for production. 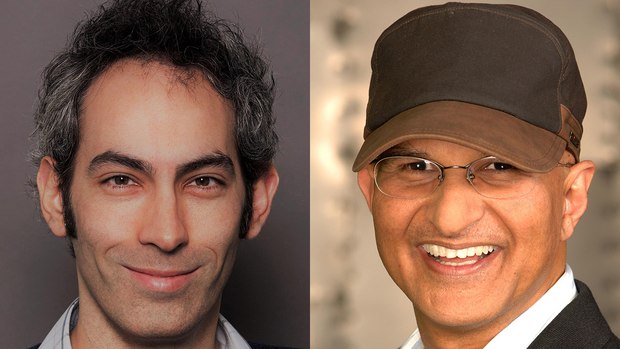 Nik Bower and Deepak Nayar of Riverstone Pictures have teamed up with ‘Shrek’ producer John Williams’ Vanguard Entertainment to produce a slate of animated features.

CANNES -- Deepak Nayar and Nik Bower’s Riverstone Pictures is partnering with award-winning producer John H. Williams (Shrek franchise) on a slate of animated movies with production budgets in the range of $15 million to $20 million.

Nayar’s Kintop Pictures and Williams’ Vanguard Entertainment will produce, while Riverstone will finance. Production will begin on Goose Chase and The Silk Road Rally, both of which are written and will be directed by Ross Venokur (Charming).

Set in the world of classic Mother Goose characters, Goose Chase is an action-comedy about Simple Simon and Wee Willy Winkie, the world's worst treasure hunters, who embark on a mission to find the legendary golden eggs in hopes of saving their world and, maybe, winning the heart of Little Bo Peep.

The Silk Road Rally is a comedy concerning an international cast of characters who come together to compete in a wacky, high-stakes, no holds barred car race along the famous Silk Road trade route in China. Peter Seaman will co-produce. His writing credits include Shrek 3, Roger Rabbit 1 & 2, Doc Hollywood and How the Grinch Stole Christmas.

Future projects in the works include Genetapets, about a 13-year-old girl named Lulu and her unique pets, who fight local crime daily in their offbeat home of Center City; Alien Rock Band; Zorgamazoo; and Brobots.

Riverstone Pictures’ next release is the big-budget family film Show Dogs, which is going out wide through Global Road Entertainment in the United States and a range of major distributors around the world later this month. The company is in post-production on a number of films, including: Michael Winterbottom’s The Wedding Guest, starring Dev Patel; The Corrupted, starring Sam Claflin; Harmony Korine’s The Beach Bum, starring Matthew McConaughey; and At Eternity's Gate, starring Willem Dafoe as Vincent Van Gogh.

Williams is best known for producing the Shrek films for DreamWorks, which earned him a BAFTA nomination. The franchise, which includes Shrek, Shrek 2, Shrek the Third and Shrek Forever After, has grossed about $4 billion at the worldwide box office. Williams also produced the successful spinoff film Puss in Boots, and Charming, which Venokur wrote and directed and is set to be released later this year.