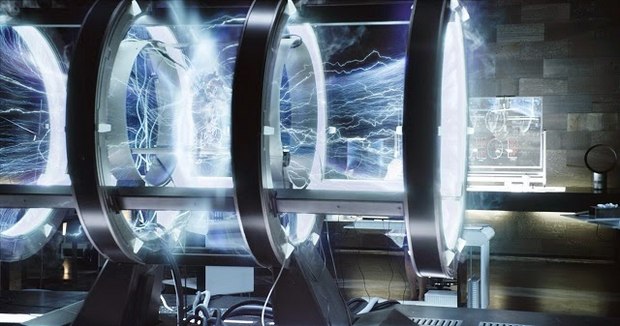 In Lakeshore Entertainment’s I, Frankenstein director Stuart Beattie offers a darkly cerebral tale in which the monster of the Mary Shelley novel (here named Adam and played by Aaron Eckhart) has survived to modern day and become embroiled in a deadly confrontation between an assortment of grisly gargoyles and demons.

Working under the supervision of James McQuaide, the film’s visual effects supervisor and one of its executive producers, Rising Sun Pictures produced several dozen visual effects shots for I, Frankenstein. The studio’s team created intricate environmental effects and matte paintings used to establish several of the film’s dark and brooding settings. Artists also conjured up effects for what became known as the “stasis chamber,” a devilish, quasi-scientific machine used to “reanimate” life.

The stasis chamber was originally conceived as needing relatively modest visual effects enhancement. The practical set piece used in the production was shaped like a large canister. Once a subject was placed inside and the machine switched on, jolts of electricity were to course around its sides as the dead subject was brought back to life. “Our brief was to create an event that quickly kicks up in force and reaches a pinnacle,” recalls RSP visual effects supervisor Adam Paschke. “It needed to feel extremely visceral.”

RSP’s design team combed through a variety of sources for inspiration, including video material of classic Kessler science experiments and earlier movie incarnations of the Frankenstein story. “The practical set was open—it contained no glass, and it was surrounded by a series of rings,” notes Paschke. “James McQuaide wanted the audience to believe that something quite eventful—and awful—was happening in those rings, some sort of force that moves from one ring to the next and meets in the middle.”

Ultimately, the team settled on a concept involving three main elements: electrical arcs that play along the sides of the chamber, “plasma skinning” that develops inside the chamber as the process of reanimation occurs, and vapor which forms as the machine becomes over-cranked and perhaps out of control. “We built a network of electricity between each ring and shrouded the subject with plasma like a cocoon,” explains Paschke. “The effect progresses over time. The force of the network is drawn from one ring to another and meets in the middle, causing repulsion. This blow out creates the stasis effect.”

The stasis chamber is used twice in the film. Early on, scientists who’ve built the machine use it in an attempt to bring a rat back from the dead. Near the climax of the film, the machine is used to reanimate a recently departed human subject. At McQuaide’s suggestion, the RSP team helped to make it appear as though the machine had undergone an evolution between the time of its first and second appearance.

“James wanted it to be clear that, during the early test with the rat, the scientists were operating in a somewhat volatile and uncertain zone,” Paschke says. “They knew the science from Victor Frankenstein’s notes, but didn’t know how far they could push it. When they pitch the idea to Bill Nighy’s character, they aren’t sure it’s going to be successful. They were walking a fine line between reanimating the subject and frying it. So, there needed to be an element to the forces that was a little bit out of control. It had to read as if it was a bit dangerous. You wouldn’t stick your arm in the stasis chamber.

“Further on in the show, when we have a human subject, the system is much more refined. It’s obvious that they have learned to calibrate it and calculate the amount of force.”

RSP’s collaboration with McQuaide was lively and intensive. Paschke notes that as an executive producer of the film, McQuaide had been involved in the production of the film from its earliest phase and had a deep connection to the story. “He knew the show inside out, as most supervisors whom we work with do, but he had so much insider information,” Paschke recalls. “He was very conscious of where he should invest his energy and where we should invest ours. That was very helpful.”

“The briefing sessions in cineSync went on for hours because he would give us such detail,” Paschke adds. “James really believed in this story. He could answer any question. And that was fantastic. He was precise and direct.”

The fruits of that collaboration are evident in the results. The stasis chamber is a much more complex, nuanced and engrossing effect than originally planned. “When it goes crazy near the end of the show, we went to town, completely bursting the seams,” Paschke says. “Controlled volatility is quite an art. We were working with systems that responded like electricity and would arc along different parts of the environment. We got a system down pat that allowed us to control that quite effectively. So we were definitely satisfied with the result. It was good fun!”