Rising Sun Pictures brings King’s Landing to life, then burns it to the ground in ‘Game of Thrones’ season finale. 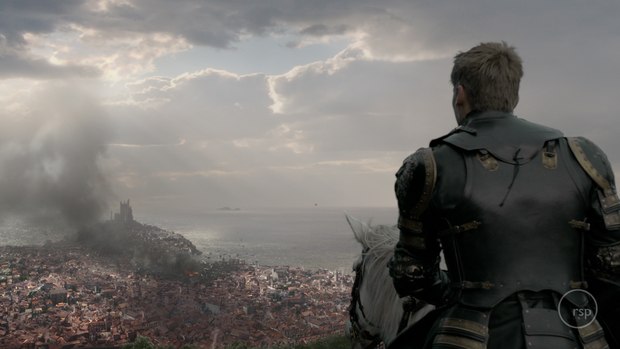 ADELAIDE, SOUTH AUSTRALIA – For the season six finale of HBO’s Game of Thrones, Rising Sun Pictures (RSP) was tasked with the challenge of replicating the sprawling city of King’s Landing and its central shrine, the Great Sept of Baelor, and then burn them to the ground in a magical, green-hued inferno. RSP created visual effects for several episodes of the show’s recently-concluded season. Most of the work centered on King’s Landing and the Sept as artists produced photo-realistic CG environments, set extensions and architectural enhancements that were blended with location footage to create the luxurious, walled city overlooking the sea.

“King’s Landing is based on Dubrovnik, a Croatian city on the Adriatic that has many beautiful, medieval buildings,” recalled RSP VFX Producer Richard Thwaites. “A lot of our early work involved wide views of the city, as well as internal and external views of the Sept (which is based on Fort Manoel in the Maltese town of Gżira).”

For several of those shots, artists filled city environments with animated digital crowds, representing the townsfolk and members of a religious cult led by the High Sparrow. The goal throughout was not only to match the look of the practical locations, but to do so in a way that appeared thoroughly real.

“Game of Thrones is a fantasy, but the aesthetic is highly realistic,” explained VFX Supervisor Hubert Maston. “The realism carries through in the design, the weight and dimension of the architecture and the atmosphere of the environments.”

In the season finale, the Great Sept of Baelor and large parts of King’s Landing are destroyed as the widowed queen Cersei Lannister exacts revenge on her rivals. A pool of wildfire below the Sept ignites, causing an explosion that fills its tunnels with flames. The blast brings down statues of the city’s seven kings. Everyone inside the building is killed and the Sept collapses. Nearby structures are also engulfed in the inferno.

“One reason that the scene is so shocking is that it seems so real,” said Thwaites. “The explosion happens from inside out and seems so powerful that you believe it can take out everything in its surroundings.”

“The fire you are used to seeing is a mix of very hot colors, orange, yellow, bright red,” explained Maston. “When you turn it green, it doesn’t seem so hot. We had to completely reimagine it to create fire that looks like fire and yet not like fire at the same time. We remapped the light, color and texture and, through trial and error, came up with a look that is both aesthetically pleasing and convincing.”

The explosion also causes the demise of the High Sparrow. Flames burst through the Sept’s mosaic floor, incinerating him.

“It’s a fully digital replacement,” note Thwaites. “It has muscle, skin, bones and internal organs…all of which blow up in just a few frames.”

“The fire works its way through his body in layers,” Maston adds. “You see his skin peeling off and bones breaking off. It was pretty gruesome.”

The initial airing of the finale drew the largest audience in the show’s history. Rising Sun Pictures did its part to ensure loyal fans had plenty to marvel at.