The studio produced over 300 VFX for Taika Waititi and Marvel Studio’s latest MCU action-adventure, including the film’s impressive opening and closing sequences. 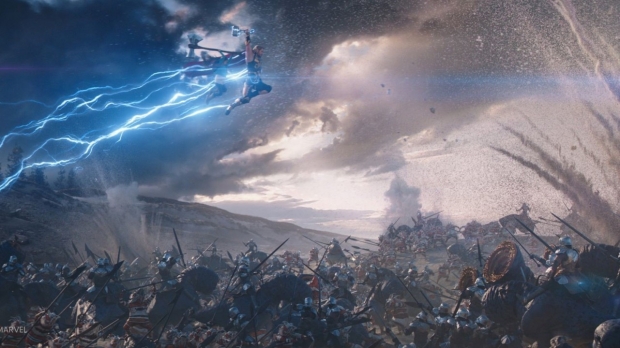 “For years, I’ve enjoyed creating previously unimaginable visuals with Rising Sun Pictures, but on Thor: Love and Thunder, they truly raised the bar,” said Morrison. “This film is a wildly unprecedented journey across the galaxy with an insane amount of VFX. RSP’s shots literally start and end the movie - with plenty in between. It’s a testament to our complete trust in their team.”

RSP was involved in the project from the beginning, assisting in a range of tests, developing concepts, and devising technical approaches for its many larger-than-life visuals. In addition, Bethell spent more than 80 days on the set - at Fox Studios, Sydney, and on location - working with the production team in capturing background plates and live-action elements.

“Visual effects is all about collaboration,” noted Bethell. “Working so closely with the filmmakers was rewarding and led to better end results. It helped us serve Taika’s vision and, having a big picture view, allowed me to lead the RSP team in an informed fashion as we navigated several very complex sequences.”

The studio’s most complex work involved the film’s 150-shot opening sequence, setting the tone for the narrative. It begins with Gorr and his daughter wandering in a desert. Artists augmented the production imagery (shot on the set in Sydney) with environment extensions and dust and sand simulations. They also enhanced Gorr’s practical make-up to create his disturbingly emaciated look.

The sequence climaxes with a confrontation between Gorr and the menacing Rapu (Jonathan Brugh), whom Gorr accuses of abandoning his people. RSP augmented the practical set with an expansive digital oasis, filling it with plants and trees as well as magical ‘flower Gods,’ composed of effects-driven flowers.

“It’s a very lush, green, tropical environment,” said CG supervisor Ryan Kirby. “We drew on a wide range of references from the Amazon rainforest and other jungles to create colorful plant life that adds richness and variety to the frame. It’s grounded in reality while having a fabulous, surreal quality. It’s meant to make audiences wonder, ‘How could something so stunning actually exist?’”

Work on the sequence was shared among artists across RSP’s main studio in Adelaide and satellite offices in Sydney and Brisbane.

“There are huge benefits in our remote pipeline,” explained compositing supervisor Francesco Cadoni. “It allows us to tap a large talent pool and diverse skill set. During the pandemic, we learned how to efficiently work remotely while maintaining camaraderie and collaboration. It paid off handsomely on this project, which was massive in scale and posed numerous, unique challenges.”

One of those challenges involved “Baby Thor,” introduced in an extended flashback montage. The baby is an entirely digital character, created with animation and artificial intelligence based on the real-life infant of a Marvel executive.

“The advantage of this technique over standard ‘deep fake’ methods is that the performance derives from animation enhanced by a learned library of reference material,” explained Cope. “The result is a full-screen photo-real Baby Thor storming into battle.”

An early adopter of AI, RSP used machine learning to give the baby an uncannily lifelike quality while exhibiting behaviors required by the script.

“Subtle nuances are what make a baby look like a baby,” added Bethell. “We had great references of the real baby and used them to get details right, such as how his mouth moves and the way light reflects in his eyes. Over several iterations, we honed the look and achieved a digital baby that audiences will accept as real.”

RSP also contributed to most of a montage scene that recaps Thor’s life.

“In true Thor fashion, we see the Thunder God getting back into shape by pulling the Guardian spaceship the Benatar and flinging giant rocks,” said Kirby. “It also features flashback to Thor’s love interests, including a wolf-woman (Elsa Pataky) and a swashbuckling pirate. Our CG team created a digital version of the wolf that was matched to the on-set performances.”

He continued, “As for the pirate love interest, our team created an extension for the practical pirate ship and the surrounding ocean as well as Kraken, an octopus-like creature that attacks another ship. Our challenge was to create the perfect backdrop for this emotionally intense scene.”

The montage exemplifies how RSP’s CG and compositing teams work together.

Cadoni explained, “It was eight or 10 sequences rolled into one. Each vignette is only two or three shots long but needed to look distinct and read immediately while telling a consistent story. It pushed the limits of what we can do.”

In another sequence, our heroes travel through space in a boat drawn by a pair of giant screaming goats named Toothgnasher and Toothgrinder on a bifrost path that Stormbreaker conjures. RSP’s work involved creating Stormbreaker’s effects and the ‘Goat Boat Space’ environment, including a pod of Space Dolphins.

The final scene is set on a mystery planet where Thor and his adopted daughter have traveled to save a village of garfish from the evil “P-Rex.”

“It was another tour de force effort from our 2D, 3D and matte painting artists,” observed Cadoni. “The scene combines crowds, environments, effects simulations, and lightning. It also involves full and partial digital doubles with AI-enhanced faces to work with various effects elements.”

Bethell describes the finale as “a moment of pure Thor awesomeness,” adding, “It was an honor to be entrusted with responsibility for the film’s opening and closing scenes. It was the type of work that we could really sink our teeth into and deliver fantastic results. We are grateful for our ongoing relationship with Marvel. Collaborating with Taika, Jake and the rest of the production team was a pure joy.”