Animation historian John Culhane -- the inspiration for Mr. Snoops in ‘The Rescuers’ and Flying John in ‘Fantasia/2000’ -- dies in his home in Dobbs Ferry, NY at the age of 81. 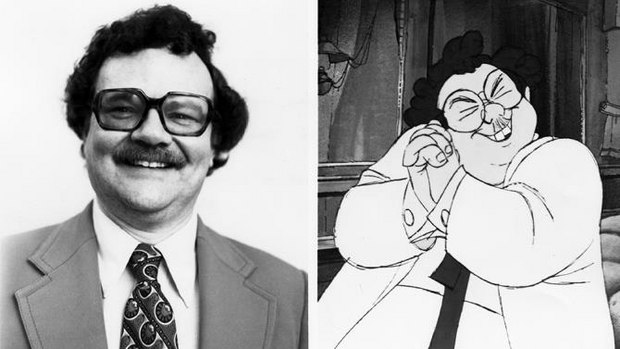 Journalist John Culhane, best known for his pioneering work as a Disney animation historian, as well as being the inspiration for Mr. Snoops in The Rescuers and Flying John in Fantasia/2000, passed away on July 30 at his home in Dobbs Ferry, New York, according to an obituary in the Lower Hudson Valley Journal News. The cause of death was complications from cardiac failure and Alzheimer’s disease. He was 81 years old.

Culhane was a writer and journalist by trade, working for major publications such as the Chicago Daily News, Newsweek, and The New York Times, however he is known to the animation world for his work as an animation historian. His books on Disney animation include “Walt Disney’s Fantasia” (1983), “Aladdin: The Making of an Animated Film” (1992) “and Fantasia/2000: Visions of Hope” (1999). Culhane also wrote books about the circus (“The American Circus: An Illustrated History”), and special effects (“Special Effects in the Movies: How They Do It: Dazzling Movie Magic and the Artists Who Create It”).

For more than four decades, Culhane inspired many up-and-coming animation students as a teacher through his classes on the history of animation at New York City’s School of Visual Arts, Manhattan’s Fashion Institute of Technology, Mercy College in Westchester County, and NYU’s Tisch School of the Arts.

He also worked as an uncredited writer on the 1983 Disney live-action feature, Something Wicked This Way Comes, and with Oscar-winning animation director Richard Williams on The Thief and the Cobbler. “John Culhane was an extraordinarily communicative teacher. In 1997, I hired him to teach History of Animation at NYU Tisch School of the Arts,” said Oscar-winning filmmaker and animation historian John Canemaker in commenting on Culhane’s passing. “For nearly a dozen years thereafter, John’s enthusiasm for, and knowledge of, the subject captured not only his students’ attention, but also their imaginations. He dazzled an always-packed classroom with tales of his first-hand journalistic experiences meeting giants of animation (including Walt Disney). He was magical, unorthodox in his teaching methods in bringing animation history to vital life. More than one student each fall semester sent me evaluations saying that John’s warmth, ebullience and supremely positive approach to life changed their lives.”

“John’s ceaseless enthusiasm for animation was a natural match for his personality -- one of the most animated men ever to stand at the corner of Mickey Avenue and Dopey Drive," Don Hahn, producer of The Lion King, Beauty and the Beast and Maleficent, said in a statement. “How lucky we are to have known him and been affected by his insights into the art of Disney, and by his witty, charming, loving spirit.”

“John Culhane was an ardent, enthusiastic and informed supporter of animation in general, and Disney animation in particular -- no surprise, given his pedigree,” said Disney animator and Fantasia/2000 and Pocahontas director Eric Goldberg. “He was also a good friend and great cheerleader to my wife and collaborator, Susan, and to me, and our various projects at Disney -- so much so, that we paid him the compliment of caricaturing him as the character Flying John in our ‘Rhapsody in Blue’ sequence for Fantasia/2000. He previously had the honor of being given the Disney treatment as the character ‘Snoops’ in The Rescuers Down Under. It gave us great pleasure to continue meeting with him over the years, and to receive hand-written letters from him signed, ‘Flying John.’” Mr. Snoops in 'The Rescuers.'

Culhane was born in Rockford, IL. At age 17, during a trip to California, he was introduced to his idol, Walt Disney, by Walt’s daughter, Diane, and over the course of a conversation that lasted several hours, he got the best advice of his lifetime. Walt told the aspiring writer, “Work for your hometown newspaper, write for your neighbors -- and just keep widening your circle.” After a Jesuit education at St. Louis University, he went back to his hometown and became a reporter and daily columnist for the Rockford Register-Republic. This was followed by a stint as an investigative reporter for the Chicago Daily News. He went on to become media editor at Newsweek, and a roving editor at Readers Digest, writing series of profiles that included such personalities as Jim Henson, Danny Kaye, Laurence Olivier and Emmett Kelly.

Culhane was enlisted by Disney’s publicity department on several occasions to help mark milestone events. In 1973, he moderated a celebration of the Disney Studios’ 50th anniversary at Lincoln Center in New York. Five years later, he was tapped to lead the 50th birthday celebration for Mickey Mouse by embarking on a multi-city, whistle-stop train trip from California to New York with Mickey and legendary animator Ward Kimball. In 1981 Culhane was the host for a series of college campus forums across the country promoting Disney films including Tron, The Black Hole and The Black Cauldron. In 1983 he wrote and starred in “Backstage at Disney,” an episode of the Disney Channel’s Studio Showcase, which included a behind the scenes glimpse of a young Tim Burton working on his first film, the stop-motion animated short, Vincent.

In a 1976 article for an in-house studio publication, Culhane explained how he came to be the model for the character of “Mr. Snoops” in The Rescuers. “While snooping around the Disney Studio on previous assignments, I had gotten to know Milt Kahl, a master animator who also designed many of the characters in the Disney cartoons. In May 1973, Milt gave a guest lecture to a class I was teaching and agreed to draw a poster to announce the event. In the poster, he caricatured both himself and me. When Milt got back to the Studio, the artists working on The Rescuers were searching for a look for one of the villains. In the script he was described as nervous, indecisive and domineered by Medusa. The short-legged fellow with Milt in the poster looked to director Woolie Reitherman like that kind of guy, and they named him, after my profession, ‘Mr. Snoops.’ Even before I saw him on the screen, I realized that Snoops did indeed look like me because, wherever I went in the Disney Studio that year, artists passing me in the halls would do a double take, then say to each other, ‘It’s him, all right -- it’s Mr. Snoops.’”