The Motion Design Department’s trained students qualify for fully featured EDU licenses of Houdini FX for home use and a one-year Core or six-month FX license upon graduation. 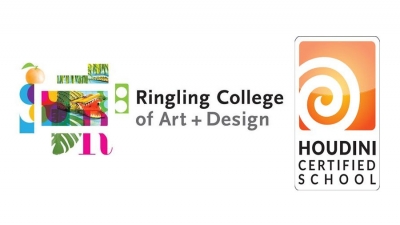 The Motion Design Department at Ringling College of Art and Design is now recognized as a Houdini Certified School. The 3D animation software application is used for film and TV, game development, motion graphics, and virtual reality. Its exclusive attention to procedural generation (or creating data algorithmically) distinguishes it from other 3D computer graphics software.

According to its creator, Houdini is most commonly used in VFX departments for the creation of visual effects in film and games and by major VFX companies such as Walt Disney Animation Studios, Pixar, DreamWorks Animation, Double Negative, ILM, MPC, Framestore, Sony Pictures Imageworks, Method Studios, and The Mill. It has been used in various feature animation productions, including Disney's feature films Blade Runner 2049, Fantasia 2000, Frozen, and Zootopia; the Blue Sky Studios film Rio; and DNA Productions' The Ant Bully.

“In the Motion Design department at Ringling College, we are uniquely and primarily using Houdini as a design tool,” confirmed Motion Design faculty, Graham Clark. “We have been chosen by more than 35 judges from major studios that reviewed our application material, our student work in Houdini, and our curriculum in Motion Design where Houdini is utilized. All judges agreed that we should be part of the SideFX team.”

Being a certified partner of Sidefx allows Ringling College to issue their trained students with fully featured EDU licenses of Houdini FX for home use, and when they graduate, a one-year Core or six-month FX license.

“Students can note this training in their resume, and a student’s best work, if chosen, could be on the SideFX education reel shown at major conferences and on their website,” noted Motion Design department head, Ed Cheetham. “We are proud to provide our students with this additional skill set that will help elevate and differentiate them from others about to enter the Motion Design industry.”

Houdini has been used in motion design for decades and in the last few years has seen a large increase in its use at professional studios.

More information on Houdini is available on the SideFX website.