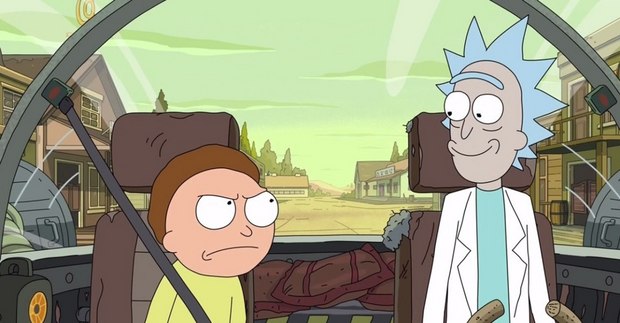 It’s no big secret that some of the biggest fans of Adult Swim’s Rick and Morty are toxic people doing toxic things. But series creators Dan Harmon and Justin Roiland have always seemed appropriately aghast at the evil hijinks of the show’s most rabid fanbase, giving some of the rest of us hope that it’s still okay to enjoy our favorite show without a big side helping of guilt and complicity.

Add to the mix the recent Weinstein allegations and burgeoning #MeToo movement rocking Hollywood and beyond, and it’s easy to see how the mighty have fallen...and keep falling, as each day brings seemingly new allegations to light. Some of the allegations and the people they’ve surrounded have been clarifying, a refreshing call to action after decades of lies, secrets and silence. Others have been more painful to observe, burning into the public consciousness as we watch beloved stars stumble and miss while navigating the process of coming clean and making things right.

Maybe Harmon, one entire half of the team behind the creation of Rick Sanchez -- the smartest man in the universe -- can show us all how it’s done.

Harmon was called out on Twitter last week for harassment by former Community writer Megan Ganz, who was responding to a tweet in which the showrunner wrote “This was truly the Year of the Asshole. Myself included. We don’t have to make 2018 the Year of the Mensch but I hope it can be the Year of the Not as Much of an Asshole. #RealisticGoals.”

Responding to Ganz’s tweet, Harmon wrote “Was just shown this....I didn’t want to add narcissism to injury by naming you without permission, but I’ve talked on my podcast about the lines I crossed. I will talk about it more in any way that you think is just. I am deeply sorry,” adding that he was “filled with regret and a lot of foggy memories about abusing my position, treating you like garbage.”

Ganz replied that she wished her memories of that time were foggier: “It took me years to believe in my talents again,” she wrote, “to trust a boss when he complimented me and not cringe when he asked for my number. I was afraid to be enthusiastic, knowing it might be turned against me later.”

Now, in an episode of his “Harmontown” podcast released on Thursday, Harmon has issued a more in-depth apology to Ganz. In the episode, Harmon details a years-long period during which he was attracted to Ganz. What first began as what Harmon called “flirty” and creepy” behavior, escalated to full-scale harassment, and -- in the face of Ganz’s rejections -- abuse.

“I was the one writing her paychecks and in control of whether she stayed or went, and whether she felt good about herself or not, and said horrible things,” Harmon said during the podcast episode. “Just treated her cruelly, pointedly. Things that I would never, ever, ever have done if she had been male and if I had never had those feelings for her, and I lied to myself the entire time about it and I lost my job, I ruined my show, I betrayed the audience, I destroyed everything, and I damaged her internal compass, and I moved on.”

This, people, is how it’s done. 1) Express Remorse. 2) Admit Responsibility. 3) Make Amends. 4) Promise It Won’t Happen Again. Ganz apparently thinks so, too, tweeting out the episode herself and calling it a “masterclass in How to Apologize. He’s not rationalizing or justifying or making excuses. He doesn’t just vaguely acknowledge some general wrongdoing in the past. He gives a full account.”

Here’s a weird one for you: Last week, I called out my former boss @danharmon for sexual harassment, and today I’m going to ask you to listen to his podcast. https://t.co/BEZAWH787V

Please listen to it. It’s only seven minutes long, but it is a masterclass in How to Apologize. He’s not rationalizing or justifying or making excuses. He doesn’t just vaguely acknowledge some general wrongdoing in the past. He gives a full account.

Season 4 of Rick and Morty is a looooong way off, folks. Let’s make sure we get there responsibly.