‘My 360’ series transports viewers behind-the-scenes for a fully immersive view of the lives of famous athletes, musicians and YouTube stars. 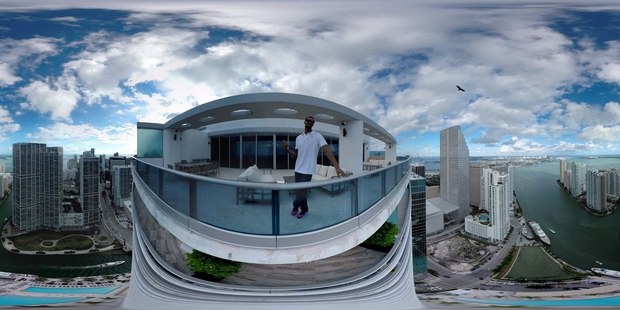 Dallas, TX/Los Angeles, CA -- Animation studio Reel FX and production company Matador have revealed details of their collaboration on Samsung’s new made-for-VR series, My 360, for its virtual reality video platform Milk VR. The series transports viewers behind-the-scenes for a fully immersive view of the lives of famous athletes, musicians, and even YouTube stars, giving them access to celebrities like Chris Bosh, Jake Peavy and YouTuber LA Beast (real name: Kevin Strahle). Each episode offers eight to ten minutes of content. The series debuted with an episode featuring Miami Heat superstar, Chris Bosh. More episodes will roll out over the next few weeks.

Reel FX and Matador collaborated on the live-action VR shoot, with Reel FX’s Dale Carman directing Bosh and Kevin Althans directing LA Beast. It was the first joint project for the two companies who were simultaneously working on multiple yet-to-debut episodic VR content. For “Chris Bosh,” the team traveled to Miami to shoot on location. The episode dives into Bosh’s world which includes iconic Miami views, his favorite sushi restaurant, a one-on-one game of basketball, and a tour of the Miami Heat locker room. Reel FX shot the episodes with three camera rigs consisting of six cameras per rig, to truly give viewers a 360˚ experience. The footage was then brought back to Reel FX’s Dallas facility for post-production, where it was stitched seamlessly together, and edited.

The studio has been capturing 360˚ orbital live-action footage since announcing the launch of its dedicated VR division, Reel FX VR in late 2014, and has made a name for itself with unique editing techniques to tell VR stories, instead of relying on a single shot approach. Reel FX also handled audio (sound design and mix) on the episode as well as the opening and closing graphics. “This 360˚ VR experience brings celebrity life to audiences in a way that they have never seen before,” Carman notes. “Reel FX’s passion is to break ground with VR techniques, and we think we’ve done that here, with both the footage and cut. Viewers will truly be amazed at the level of immersion. Working with Matador is always fantastic and we are looking forward to viewers seeing our other collaborations.”

Reel FX is no stranger to VR content development, having recently completed work on Insurgent: Shatter Reality VR experience, which was the first VR experience to be distributed on Samsung Gear VR and Cardboard via Apple iTunes and Google Play at the same time. It continues to be one of the top downloads on the VR marketplaces.