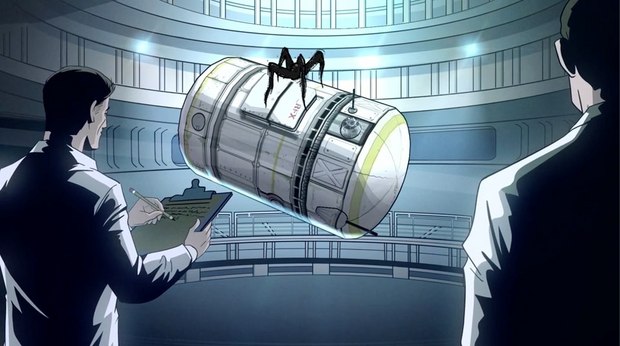 The discovery of a hostile lifeform during a manned Soviet mission begets a U.S.-Soviet collaboration gone-wrong. In this alternate history, President Kennedy survives to seize control of the space station, which is ultimately acquired by TranStar. The video ends with the implication of a transhuman future, where the game presumably begins.

Lewis also composed original music for the short, combining his lifelong experience as a musician and his decades of animation expertise into a cohesive cinematic product: “Having the opportunity to write the music for the piece afforded me a unique creative viewpoint, allowing me to let both the animation and music inform one another as the piece took form,” he said. “I was able to connect the dots in a way that an outside composer likely would not have had the chance to do, and it made it all the more fun!”

Lewis worked closely with digital agency AKQA to bring a retro, 2D-cartoon aesthetic to the piece that stylistically evolves as the piece progresses. The Reel FX team crafted the character design for the trailer, leveraging their in-house feature artists to deliver a defined motif. Lewis then carefully developed an arc that unfolds through color, camera, design and music changes, progressing from 50s Space Race-style, to the futuristic look of cosmic 2035.

Developed by Arkane Studios, creators of the critically-acclaimed game Dishonored 2, the rated-M Prey launched worldwide for Xbox One, PlayStation 4 and PC on May 5th. A free Prey demo is available for PlayStation 4 and Xbox One that allows fans to board Talos I and play the opening hour of the game.