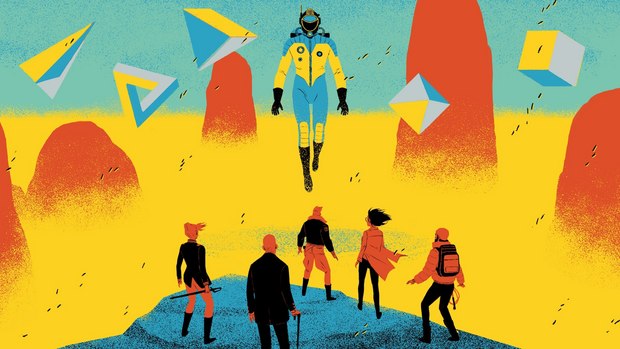 With the fundamental mission of telling great stories across emerging tech platforms, Flight School launches in Dallas, Texas with a team of approximately 30, including creative directors, producers, animators, engineers, developers and game designers. “Flight School is a collective of amazing artists and technicians who bring the highest standards to everything we create and reflect our emphasis on innovation, storytelling and design,” explains Oldenburg.

Reel FX has a 22-year history as a premium digital content creator for major film studios, theme parks, ad agencies, and fortune 500 companies, which, according to Reel FX head of strategic partnerships Chuck Peil, “established the studio as an early innovator and leader in the world of emerging technology. We quietly built one of the world’s largest portfolios of completed VR projects, and now with the addition of the Moonbot creative team we couldn’t be better positioned.” Recent successes include the Lumiere-awarded Shinola behind-the-brand film, activation for the Lionsgate film Power Rangers, and Verizon’s Super Bowl 51 Virtual Gridiron VR experience.

During their years at Moonbot, members of the Flight School creative team became well known for their highly regarded narrative driven animation and interactive projects including the Chipotle Mexican Grill short film and app, The Scarecrow, one of the most highly awarded branded entertainment pieces in history. Oldenburg won an Academy Award for his work on The Fantastic Flying Books of Mr. Morris Lessmore and shares Emmy awards with executive creative director and co-director Limbert Fabian on Silent and Scarecrow.

Flight School represents a unique and dynamic blend of creative and technical expertise. “We’ve combined award-winning storytellers along with our renowned team of VR experts, and are primed to meet the growing demand for compelling VR content,” says Clark.

While Flight School will operate as a separate entity, it will benefit from Reel FX’s robust infrastructure, as well its teams of entertainment and commercial talent. Executive vice president Enochs looks forward to continuing the legacy of crafting inventive stories that evoke a sense of wonder. “Our stories speak to audiences of all ages,” he says. “We want to tell stories for the kid in every adult and the adult in every kid. We want to awaken the childlike wonder that still exists in all of us. Innovation is part of our DNA and we are always on the lookout for new and exciting ways to expand the narratives and worlds we create.”

Continuing its groundbreaking work in VR, Flight School will begin launching original content, starting with the release of Manifest 99 in the summer of 2017. “This project will set the course for the types of stories we love to tell,” says Oldenburg, who describes the project as an interactive narrative VR experience that leads the user on a mysterious and emotional journey of discovery and redemption.