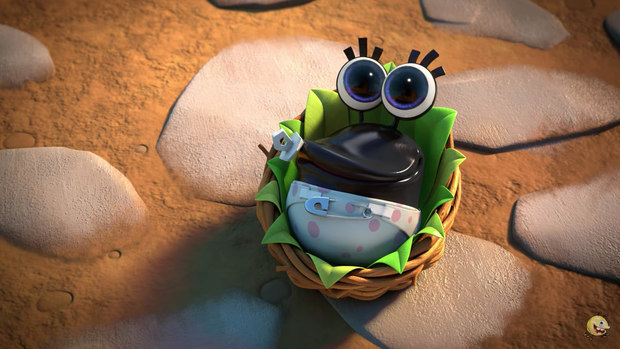 Baby Slug’s Big Day Out follows the adorable Baby Slug on a Fiendish adventure. But don’t be fooled by Baby Slug’s overwhelming cuteness and innocent disposition -- the Slugs are born and bred to wreak havoc on the Fiends.

“Having worked on the previous three Best Fiends animations and Don’t Download Best Fiends, I know the brand well and was excited to be a part of the latest animated short, Baby Slug’s Big Day Out,” said Kate Walsh, the voice of JoJo, the butterfly. “I love the world of the Best Fiends characters and, of course, I am partial towards JoJo and her strong female voice.”

The cinematic short was directed by Augusto Schillaci, who is also responsible for crafting short form digital content for brands including recent promos for The LEGO Batman Movie. Produced by Emmy-nominated producer, Claudia De La Roca (Futurama) and music composed by Heitor Pereira (Despicable Me), the animation is supported by top industry talent.

“I’ve really enjoyed working closely with the teams at Seriously and Reel FX to bring the world of Minutia to life through each of the Best Fiends animated shorts,” said Schillaci. “I love seeing how the stories progress from the game, to the script, and finally to the animations themselves.”

Strengthened by the direct connection with its fans, Seriously can coordinate in-game themes and videos with what players and fans see on social channels. The first three animations have more than 14.2 million views on YouTube alone, and the last short, Fort of Hard Knocks, garnered over 1 million views in just two weeks.

Seriously is a mobile first entertainment company. The company’s first mobile game and IP, Best Fiends, was released in October 2014. To date, the Best Fiends games have been downloaded 85 million times and have as many as 2 million daily active users. The company is funded by Upfront Ventures, Northzone, Korea Investment Partners, Sunstone Capital and Daher Capital. Seriously has offices in Venice, California and Helsinki, Finland.