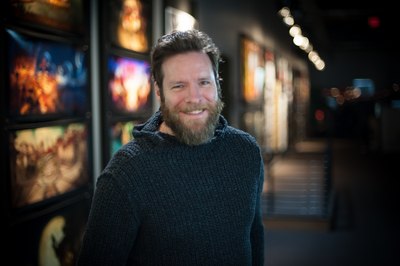 DALLAS, TX -- Digital studio Reel FX, has added Colin McGreal as Creative Director. McGreal is a versatile creative director and designer with over two decades of branded content experience working with such top clients as Verizon, American Express, Ford, Samsung, Wendy’s, Goodyear, Toyota and Time Warner Cable, among numerous others. Fusing a vast knowledge of filmmaking and technical processes, he is capable of both leveraging his background to collaborate with creative teams and fully executing projects from start to finish. McGreal most recently worked as Creative Director on Reel FX’s Hunger Games VR Experience for Lionsgate/Samsung, which launched during NY Comic-Con. His other Reel FX VR work includes the “You vs. Sharapova” Virtual Reality experience for American Express, which launched at the 2015 US Open, and the Pacific Rim Jaeger Pilot VR Experience for Legendary Pictures.

“As someone who has engaged with a diverse collection of studios, Reel FX has continuously grown more attractive as I’ve watched them aggressively embrace new platforms in the entertainment and commercial world,” notes McGreal. “It is this commitment to staying ahead of the curve that has drawn me to formalize our long-standing relationship.”

Adds Reel FX General Manager David Bates, “Colin brings a wealth of creativity, as well as an immense range of directorial experience in design, CG, and live-action projects to our team. The combination of his depth of knowledge, his creative excellence, and his leadership make him a perfect addition to our already robust team.”

McGreal, a graduate of Rhode Island School of Design, cut his professional chops by toting cans of film for a film lab in Hell’s Kitchen on a midnight shift and not quitting after getting mugged his second night on the job. Tiring of the vampire shift, he moved to designing boards at R/GA, learning a whole new facet of the industry. After directing his first spots in Saigon, Vietnam, McGreal worked as Creative Director for premium studios such as Charlex, Shilo, Spontaneous, Suspect and HUGE, completing spots for agencies such as McCann-Erickson, Saatchi, Digitas, Publicis, JWT and BBDO.