Animated and live-action short films from more than two dozen countries will be screened for viewers of all ages. 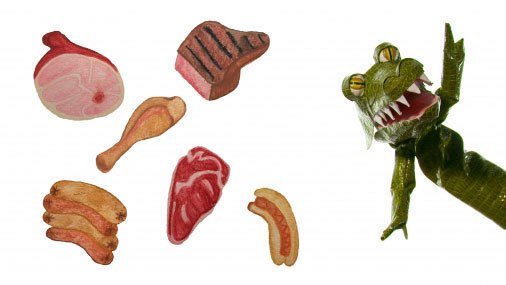 ‘A Reptile Repents’ by Rosie duPont of the United States will screen as part of the REDCAT International Children’s Film Festival May 26-June 10 at the REDCAT Theater in downtown Los Angeles.

CalArts' downtown center for contemporary arts presents the 13th annual REDCAT International Children’s Film Festival from May 26 to June 10, with three different programs daily for children of all ages.

Curated by Elizabeth Shepherd and presented in partnership with the Northwest Film Forum, the festival presents short films highlighting the most innovative and magical animation techniques, as well as mesmerizing live-action films from around the world. Audiences of all ages will be inspired by these works from more than two dozen countries, including Argentina, Switzerland, Japan, Mexico, France, Belgium, Croatia and The Netherlands.

The programs are as follows:

Dive into exciting adventures, vibrant colors and exquisite storytelling with this timeless collection of 11 animated films from nine countries. Chase a kite into a mysterious cave, discover how to light up a dark forest, fill up a marvelous hole in the ground, soar with a flock of birds, discover the way to wake up a whole town, and discover all the things that make you special.

All ages. 60 min. Most films are non-verbal, one in English and one Spanish with English subtitles.

Peer up at a canopy of trees, catch a cloud, dip your toes in a cool stream, and dodge an icy snowball during these films about outdoor adventures. Grab your gear for great short films to remind you that nothing is better than spending time in nature!

Ages 5 and up. 62 min. All films are either in English or are non-verbal.

Colors are vivid and lessons are timeless in this collection of animated films exploring myths, legends and fairy tales from around the globe. Anything is possible in these worlds created from scratch: justice falls down from trees, children can save the world from chaos and bring forests back to life, a swan can transform the life of a man, and a hunter can be kidnapped by a whale and taken to a land of enchantment.

Ages 7 and up. 64 min. All films are either in English or are non-verbal.

Some days start out the same as all others, but then shift suddenly into something extra-special. These animated films celebrate times when special places and powers are revealed, out of the blue. You’ll meet a man who can wake up a whole town, a girl who learns to cast a spell and birds that outsmart a weasel in an explosion of color and sound. Close your eyes, and make a wish. It might just come true!

Ages 4 and up. 55 min. All films are either in English or are non-verbal.

May 27 to June: Caleidoscopio De Sueños

These films from Spain, Mexico and Argentina will fill up your senses with color, light, sound, and the beautiful music of the Spanish language. Perfect for fluent speakers and language learners alike, with stories about friends, families, adventure, and love of nature.

Ages 5 and up. 60 min. All films are in Spanish with English subtitles.

We all need someone to watch over us, and in these films from seven countries, we meet kids, parents, and friends who teach each other important lessons about love, understanding and growing up. With love and support, youth can overcome challenges both big and small, to follow their dreams. This program begins and ends with documentaries about kids who live in conflict zones — where even more support and help is needed.

Ages 7 and up. 71 min. Two films are non-verbal. One in English. Three films in Arabic and English, Hindi and English, and Dutch with English subtitles.

This collection of films celebrates friendship, fun, food, and adventure! Meet an alligator with a special diet, an avocado who searches for his missing half, some pals who live in a sushi box, fairies that float in a fluffy forest, a tiny man who lives inside a boy's pocket, and a grumpy toad who saves the day for all his friends. You'll also see an amazing live-action film that takes place entirely within a cool Rube Goldberg machine!

Ages 2 and up. 63 min. Most films are non-verbal. One film in English. Three films in Japanese, Dutch and French with English subtitles.

Feast your eyes and indulge your senses in a glorious banquet of international animation. Filled with creations made with stop motion, rotoscope, paint, pen-and-ink and paper, this program will take you on journey filled with wonder.

Ages 7 and up. 58 min. All films are either in English or are non-verbal.

Ticket cost $5 and are available in advance online.