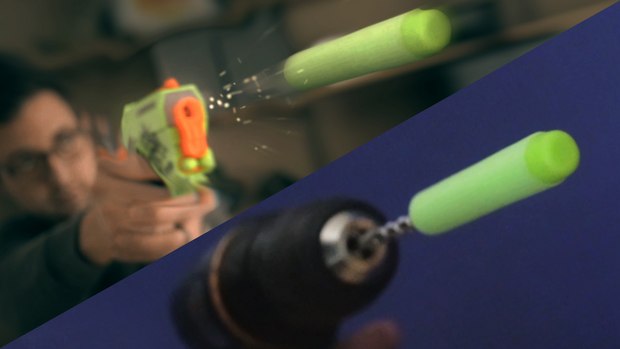 Portland, OR -- Springboarding off their last short film, Old/New, narrated by Patton Oswalt, Red Giant’s film team announced that it will be producing new Film Team Experiments each month.

Packed with visual effects and running under 60 seconds each, these short Film Team Experiments will be posted to the Red Giant Films YouTube Channel, and will be accompanied by behind-the-scenes breakdowns that walk viewers through the filmmaking and post-production process. To kick off the series, Red Giant Films is releasing three experiments, created by Webby Award-winning director Seth Worley: Hammer Time, Dartistry, and Death is a Highway.

“When we created our first film, Plot Device, we got an unprecedented reaction and a demand for more,” comments Aharon Rabinowitz, executive producer at Red Giant Films. “We’ve made six more films since then, and we hear from our customers that our films and behind-the-scenes videos inspire them to pick up a camera and create something. With Red Giant Film Team Experiments, we’re stoked to be bringing even more inspiration -- but really, we’re just looking forward to having some fun and working together more.”

“Whenever we set out to create a new film, we tend to put our heads down for several months before we have an end product, and we stay pretty focused on just that,” adds Worley. “This is an opportunity for our team to try new techniques, without the burden of a bigger story or deadline.”

Every Film Team Experiment will feature visual effects techniques -- both practical and CGI -- that achieve Hollywood-quality results on a small budget. Viewers will learn how to create amazing visuals, such as heat waves off of a bullet, Thor-like lightning effects, dangerous-looking stunt driving, and more. Behind-the-scenes films will explain the techniques used to create each effect, showing novice and experienced filmmakers alike how they can apply the same effect to their films. In addition to the Film Team Experiments, the team will continue to produce their award-winning short films.

“Rest assured, we have some great stuff coming both in the realm of short films and experiments,” said Rabinowitz. “And maybe some bigger stories too. Stay tuned.”