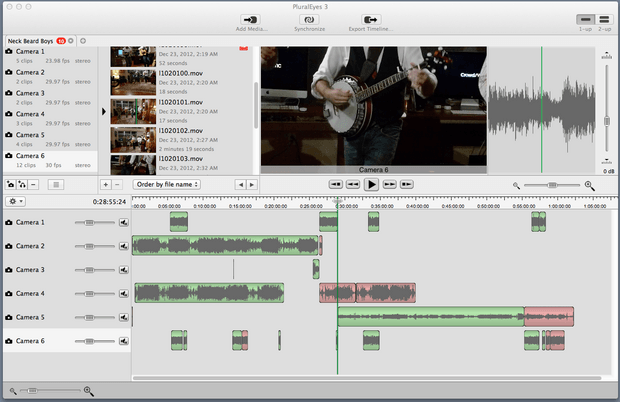 Software developer Red Giant has announced PluralEyes 3.5, an update to its Shooter Suite’s automated audio/video sync tool. One of the editing industry’s most popular tools, PluralEyes literally saves hours or even days of audio/video syncing work by analyzing the audio from all devices and automatically syncing them up with the touch of a button.

“PluralEyes has revolutionized the way people work on and off set,” said Bruce Sharpe, who originally created the app for his own projects. “On set, it frees shooters from having to use clapboards or timecode, making shoots faster and easier to set up. At the same time, editors don’t have to pay for that freedom later. PluralEyes removes the time-consuming process of manual syncing that slows editors down, right before post-production. That lets them get projects done more quickly.”

And while it’s hard to make a product that already feels like magic even better, Bruce and his team are constantly hard at work adding new features and media support, based on user feedback. “We want PluralEyes to be as useful to as many people as possible,” said Randon Morford, Shooter Suite product manager. “A lot of our focus for this release has been on improving and expanding support for more media types. We’ve greatly improved support for AVCHD cameras, including support for spanned clips.”

In addition, PluralEyes’ Replace Audio feature now supports many more media types than before, bringing this popular feature to a much larger group of users.

But while PluralEyes is expanding support for more cameras and formats, speed and accuracy are still its cornerstone. Version 3.5 includes further improvements to the sync algorithms, making PluralEyes faster and more accurate than ever before.

In another industry first, to achieve the best accuracy, PluralEyes 3.5 now includes the unique ability to correct sync drift where the audio and video begin to lose sync over time on longer clips. This lets it achieve frame-accurate syncs even for audio recorders that don't have that level of accuracy themselves.

Also new in PluralEyes 3.5 is an integration with BulletProof, Red Giant’s footage backup and preparation tool. When you are ready to begin syncing your files, BulletProof sends the imported footage over to PluralEyes in an organized way, allowing you to sync your footage immediately.

“PluralEyes is a powerful tool for working with audio and video,” said Sharpe. “But it really addresses one of post-production’s - and life’s - biggest challenges: having more time to do what you love.”