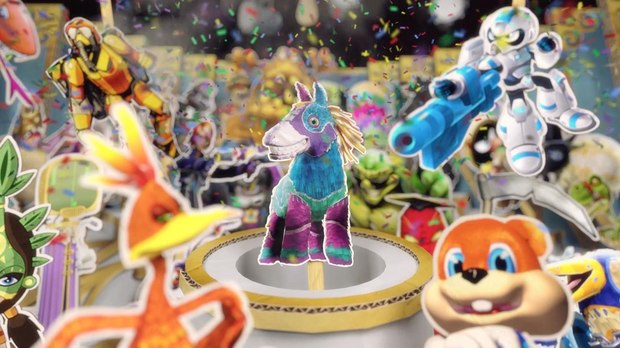 How do you pack more than 30 years of gaming excellence into one short film?

Manchester and Westby-based animation studio Realtime UK recently teamed with British video game developer Rare to take that challenge on with a nearly two-minute animated short, Rare Replay, that would capture the very best of the company’s amazing achievements in video games.

The Realtime UK team was enthusiastic about the opportunity to collaborate on a project employing such a distinct visual style, which differed from the work the studio is generally known for and required a slightly different approach.

“We already have an established pipeline for our more realistic game trailers, but we've adapted it somewhat to work on Rare Replay's alternate look,” said Realtime UK Senior Generalist/VFX TD Chris Scubli. “[Autodesk] 3ds Max was the main software for the trailer, using [Chaos Group’s] V-Ray 3.1 for rendering. The assets were modelled in 3ds Max and textured with [Adobe] Photoshop and [The Foundry’s] Mari, paying attention to make everything look like it was made out of cardboard. The confetti effects were done with nCloth in [Autodesk] Maya, then cached and imported into 3ds Max through [the] Allembic [open computer graphics interchange framework]. All other particle and effects were done within 3ds Max using Particle Flow and FumeFX.”

Lighting and rendering was approached to make the scenes look like real-life miniatures, with the animation simulating the playful bounciness that these characters would portray on a small stage. Using the OpenEXR file format, render passes were brought into Adobe After Effects for compositing and grading using Red Giant’s Magic Bullet Looks. The entire project was managed in Shotgun, allowing for an efficient and clear way of getting the shots through the approval process internally and with the client.

“It was easy to configure Shotgun's interface to let us display relevant data for each asset, shot and task, while having a clear visual feedback of how the trailer is progressing,” Scubli added.

Check Rare Replay below, along with a new making-of video detailing the work that went into the project: