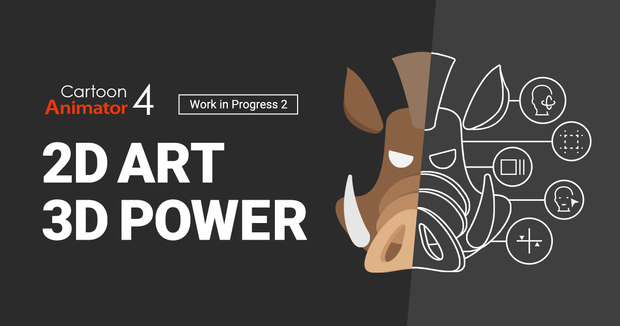 Cartoon Animator 4 breaks through the limitations of 2D art, and delivers a practical way for 2D animators to create characters with advanced animation along with vivid expressions. The 360 evolution streamlines the workflow for Head Creation, Expression Setup, and directly to the animation core with face key editing, puppeteering and the timeline system.

Quickly Transform a 2D Face into a 3D Head

3D Head Creator transforms 2D art into 3D styled characters with up to 360 degree of motion for deeply rich performances. Photoshop round trip integration for editing multi-angle character in and out of 3D Head Creator. This feature is a complete PSD to CTA round-trip workflow for 360 Head Creation. Users can design 360 heads with photoshop layers. The 360 Head Creator can generate and send angle definitions back to Photoshop, new PSD layers are generated for 360 angle adjustments. For more information on 360 Head Creator, visit https://www.reallusion.com/cartoon-animator/360-head-creator.html. Cartoon Animator 4 Pro or Pipeline is available for free with a purchase of CTA3 Pro or Pipeline Bundles in the Reallusion Software Store.