PBS KIDS will premiere an out-of-this-world half-hour Christmas special of the popular animated series, Dec 11 on TV, the web, video app and VOD. 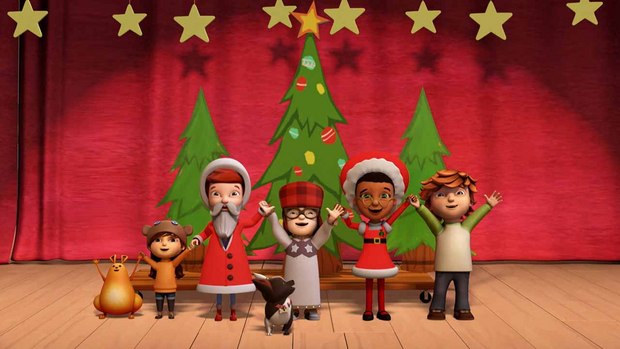 PBS KIDS will premiere Ready Jet Go!: Holidays in Boxwood Terrace, Dec. 11. The Christmas special will also be available to stream for free beginning on that date on pbskids.org and the PBS KIDS Video App, and fans can check it out via the 24/7 PBS KIDS Channel as well.

In Holidays in Boxwood Terrace Jet is over the moon when his idea for the annual Boxwood Terrace Christmas Pageant is accepted – and he gets to direct the show. He casts Sean, Sydney, Mindy and Sunspot as characters in the play, and also hires Mitchell Petersen to help him find that elusive, intangible thing called Christmas Spirit. Jet keeps searching for the Spirit of Christmas, and Sean and Sydney try hard to define it for him, while Mitchell really wants to belong to the group, but can’t quite figure out know how to fit in. But then, in a heartfelt conclusion, the kids get their answer about the true meaning of Christmas Spirit. Ready Jet Go! makes the science of space cool for the 3- to 8-year-old set with vibrant animation, action-packed adventure and high-energy music, taking young viewers on a journey into outer space, and building on their natural curiosity about science, technology and astronomy. The series also features a leading NASA astronomer – the Jet Propulsion Lab’s Dr. Amy Mainzer, the show’s science curriculum consultant who stars in its fun and informative live-action segments.

Ready Jet Go! was created by Craig Bartlett (Hey Arnold!, Dinosaur Train) and follows neighbors Sean and Sydney, who befriend the new kid on their block, Jet Propulsion, who happens to be an alien from the planet Bortron 7. Together, they explore the solar system and its effects on the science of Earth.