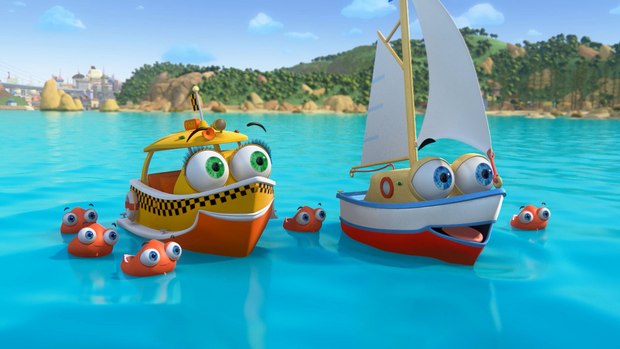 The deals, negotiated by Raydar Media’s Managing Director, Alison Rayson, give the fledgling distributor and co-producer a raft of ratings winning commissioned children's content to exploit across all rights at one of its first international markets as a stand-alone venture.

“We're looking forward to bringing these innovative and high calibre titles to children's buyers,” Rayson commented. “Sydney Sailboat and Teacup Travels have achieved impressive ratings on ABC Kids and on Cbeebies and are receiving a rapturous reception worldwide even at these early stages of their international launch cycle.”

Known as Bubble Bath Bay in Australia, Sydney Sailboat (52 x 11) is an animated CGI series which premiered earlier this year to huge audiences, rapidly becoming one of ABC KIDS top performers viewed by 50 percent of all available pre-school audience. With a broad appeal to both young and older pre-schoolers alike, the series launched its first 26 episodes in March and a second 26 season in June.

Produced by Essential Media and Entertainment in association with Shambles Communications, Ideate Media, Telegael and Screen NSW, the series takes children into the fun-filled lives of eager young Sydney Sailboat and his close band of nautical friends as they explore the world of Bubble Bath Bay.

Teacup Travels (25 X 15) is an innovative, live-action series that fills a unique space in pre-school children’s television worldwide: Historical fiction set in an adventure storybook landscape. Each self-contained episode centres around the relationship between two intelligent and inquisitive children called Charlotte, aged six and Elliot, her brother, aged eight and the magical adventures they go on to ancient civilisations around the globe. All are made possible by the stories told to them by their Great Aunt Lizzie (played by BAFTA award-winning actress Gemma Jones).

“This is a first for CBeebies to bring ancient history and archaeology to our young audience. The series combines story telling with high adventure in a way that will inspire and encourage children to want to learn more about life in ancient times,” said Cbeebies controller Kay Benbow in announcing the new commissions. “I think children will love going on the adventures with Charlotte and Elliot to discover more about what life was like thousands of years ago.”

Rounding out the rest of Raydar's kid's slate includes:

Commissioned by Nickelodeon and aired on Sprout in the U.S. and Milkshake in the U.K., Olive the Ostrich (104 x 5) is an animation series for pre-schoolers worldwide, with a big difference... children help make the show! In each episode, animators bring to life real pictures drawn by children who create all the guest characters, places, and objects that Olive encounters.

Mouse and Mole at Christmas Time (1 x 30) is an animated holiday special about true friendship that follows Mouse and Mole as they team up with their friends Miss Hare, Rabbit, Hedgehog, Frog and Rat to enjoy the 12 days of Christmas. The animated tale is based on the successful and endearing series of children’s books written by Joyce Dunbar.

Magic Hands (30 x 5) is a ground-breaking new pre-school poetry series mixing live-action with animation. Covering a huge variety of classic and modern poetry ranging from Robert Louis Stevenson to Christina Rossetti and Michaela Morgan, the programmes are fun, five-minute episodes that mix sign language, the spoken word, music and vibrant animation to bring the poems to life and capture the imaginations of both deaf and hearing children.

Girl Vs. Boy (21 x 30) is the world's first ever romantic “whodunit” TV series that follows the adventures of 16 year old Maxine as she navigates the dramatic breakup of her best friend Hailey with her perfect boyfriend Tim, in the tight knit suburb of The Bay.

Reservoir Hill (16 x 10 and 1 x 90) is a dark and edgy psychological thriller for a teen and family audience with an exciting and innovative new level of technology enabling viewers to interact with the story's lead character, Beth Connolly. At the end of each episode, audience members can SMS Beth with text advice as to what decision she should make next and watch her read and act upon it, effectively making fans of the show characters in the final scene.