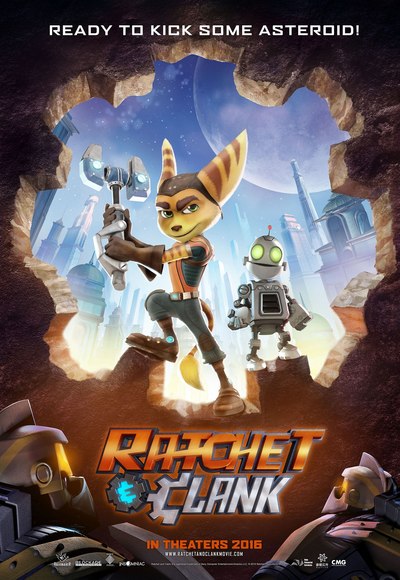 Vancouver-based animation studio Rainmaker Entertainment and production company Blockade Entertainment, together with China’s CNHK Media Ltd., have announced a multiple award-winning celebrity voice cast for Ratchet & Clank, the CG-animated feature film based on the iconic PlayStation video game franchise from Sony created and developed by Insomniac Games. The feature will be screening for international distributors this week in the Marché du Film in Cannes 2015.

“The collaborative relationship between Rainmaker Entertainment, PlayStation, Insomniac Games and all of our partners has helped us to bring this massive game franchise to the big screen,” commented Rainmaker Entertainment President and Chief Creative Officer Michael Hefferon in making the announcement. “Our outstanding celebrity talent together with the original voices from the game really bring these characters to life, and we are confident that Ratchet & Clank will delight fans with its authenticity and charm, while families everywhere will find a new family-friendly buddy duo to love.”

“We are honored and thrilled to have these actors join our cast,” added Blockade Entertainment CEO Brad Foxhoven. “Their unique voices, and the level of humor and emotion they bring to their roles will help to create some endearing and memorable characters in the film.”

“Everyone at Insomniac is thrilled that Ratchet & Clank will be shared in cinemas around the world with new and longtime fans alike,” said Insomniac Games founder and CEO Ted Price. “It's been particularly exciting to collaborate closely with PlayStation, Rainmaker and Blockade on character design, story, animation, game asset sharing and marketing support to ensure an authentic Ratchet & Clank intergalactic adventure.”

Ratchet & Clank tells the story of two unlikely heroes as they struggle to stop a vile alien named Chairman Drek from destroying every planet in the Solana Galaxy. Ratchet is the last of his kind -- a foolhardy “lombax” who has grown up alone on a backwater planet with no family of his own. Clank is a pint-sized robot with more brains than brawn. When the two stumble upon a dangerous weapon capable of destroying entire planets, they must join forces with a team of colorful heroes called The Galactic Rangers in order to save the galaxy. Along the way, they will learn about heroism, friendship, and the importance of discovering one’s own identity.

Already sold in over 25 international territories by leading International Sales Agent, Cinema Management Group (CMG), Ratchet & Clank is set to be the most successful 3D animated feature for CMG since it started licensing independently produced animated features in 2004.

Co-financing was arranged by David Sheldon’s Seattle based Film Financial Services (FFS) and includes Rainmaker as the lead investor along with China’s CNHK (backed by Wang Sicong’s Prometheus Capital), and Cinema Management Group.

Sony Computer Entertainment America will release Ratchet & Clank, a re-imagination of the origin story and companion to the animated film, for the PlayStation4 computer entertainment system along with the release of the film. The game is being developed by franchise creator, Insomniac Games. Since the first Ratchet & Clank video game was released in November 2002, the franchise has been a massive success, quickly becoming one of the most popular franchises in the SCEA portfolio, selling over 26 million copies worldwide.