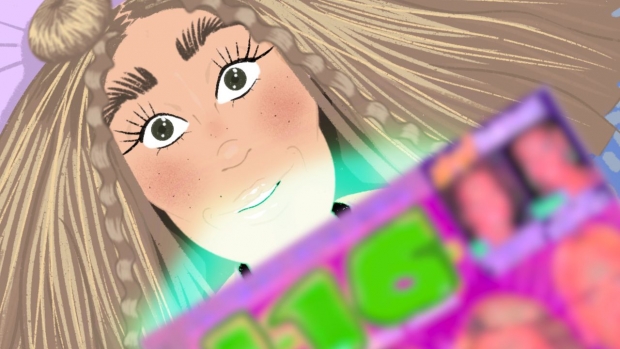 According to RALPH, “I remember being a kid and being obsessed with this world of sweet female pop music. Mandy Moore, Robyn, The Cardigans...and ‘Crush’ by Jennifer Paige. I had a babysitter named Kelly who I idolized. She drove a blue convertible and chewed gum and would play ‘Crush’ in the car. The song made me feel cool and flirty and powerful, and years later, I wanted to try and recreate that feeling."

In visualizing RALPH’s concept for the music video, Cooper shares, “The story behind the 'Crush' video is an ode to how magical it was to be a pre-teen in the early 2000s. I wanted to find a way to depict the kind of fever dream you would enter while sitting in your room, reading teen magazines and listening to your favorite pop stars and just being swept up in the fantasy of pop music. Listening to RALPH's music always takes me back to that place, and I hoped this video would be the perfect opportunity to celebrate that."

Cooper drew inspiration from Lizzie McGuire, Vitamin C, Degrassi, That's So Raven, and pre-teen magazines. “When I first heard the song, it took me back to a time of video countdowns and how much of my formative years were shaped by my consumption of pop music and greater pop culture,” she explains. “RALPH and I are about the same age, and I think we both hold a soft spot for the early 2000s era, and it still influences our work as artists. I had about 3.5 [weeks] to go from concept to execution. It was a tight timeline, but RALPH and her management fully trusted me with the creative vision, which is the kind of support you need in a quick turnaround. “The production process was basically drawing each element as a 2D illustration on Procreate and rigging/compositing the video in After Effects,” she adds. “I did this video while quarantined away from my work desk, and the biggest challenge was running up against the limitations of my laptop (who doesn't have an After Effects horror story?) Knowing that would most likely be the case, I focused on the story, electing to not use lip-syncing or heavy movement rigging, and let the song and the ethos of my inspiration shine through.”