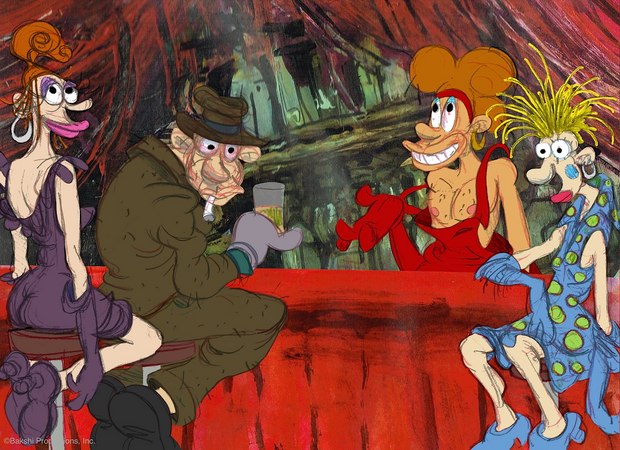 Bakshi’s iconic career has spanned six decades. He’s been responsible for such notable properties as Fritz the Cat, Heavy Traffic, Coonskin, Wizards, The Lord of the Rings, American Pop, Fire and Ice and Mighty Mouse: The New Adventures, to name just a few. Last Days of Coney Island was mostly animated by Ralph Bakshi, and all the backgrounds were done by him.

Bakshi, who has been involved in a slew of projects as a director, writer, producer and animator, has developed a new generation of fans in the digital age with social media, his presence at the major Comic Con Conventions and the sales of his projects via DVD. The national release of Last Days of Coney Island comes on the heels of a successful Kickstarter campaign which raised over $174,000 from 1,290 fans and backers from almost every major continent.

Created, written, and directed by Bakshi, Last Days of Coney Island is a violent collage of characters, all striving to get somewhere. They can’t because they don’t know how to proceed without destroying everything, but still they try. They are all sitting in the first car on a Coney Island roller coaster going downhill fast.

Last Days of Coney Island is produced by Edward Bakshi with music by Mark Taylor. Zac Wittstruck is the editor, and animation and backgrounds are by Ralph Bakshi. The main character voices are: Shorty (voiced by Omar Jones), Louie (Rick Singer), Molly (Tina Romanus), Louise (Esperanza Quintero) and Max (Robert Costanzo). Sound design and mixing are by Kathleen Edwards and Tor Kingdon at Hear Kitty Studios.

In the 1970s, Ralph Bakshi established an alternative to mainstream animation through independent and adult-oriented productions. Fritz the Cat was the first animated film to be accepted at the Cannes film festival, and the New York Museum of Modern Art premiered both Heavy Traffic and Coonskin and added them to their collection.

Between 1972 and 1992, Bakshi directed nine theatrically released feature films, five of which he wrote. Beginning his career at the Terrytoons television cartoon studio, he moved to the animation division of Paramount Pictures in 1967 and started his own studio, Bakshi Productions, in 1968. Bakshi made his debut feature film, Fritz the Cat, released in 1972. It was the first animated film to receive an X rating from the Motion Picture Association of America, and the most successful independent animated feature of all time.

Over the next eleven years, Bakshi directed seven additional animated features. He is well known for such films as Wizards (1977), The Lord of the Rings (1978), American Pop (1981) and Fire and Ice (1983). In 1987, Bakshi returned to television work, producing the series Mighty Mouse: The New Adventures, which ran for two years. In 1989 he wrote and directed for PBS American Playhouse the live-action film, This Ain’t Bebop, starring Harvey Keitel. He then created and directed Cool World (1992). Bakshi returned to television with the live-action film Cool and the Crazy (1994) and the anthology series Spicy City (1997) for HBO. He then focused on painting and had many shows. He has now returned to his first love, animation, where he allows himself the same freedom of expression as he has in his painting.