Using the RainBlox blockchain platform, companies plan to expand on the upcoming animated feature film trilogy with Web 3.0 multi-format content including a spinoff series, NFTs, video games, merchandise, and an original soundtrack; the franchise is slated for release in late 2023. 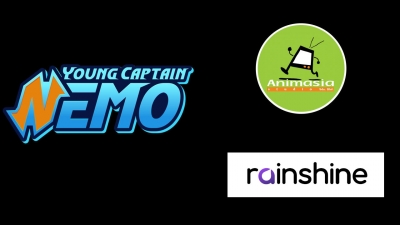 Rainshine Entertainment and Animasia Studio have teamed up to co-produce the new young adult and family franchise, Young Captain Nemo, first announced back in February 2021. Anchored by RainBlox, Rainshine’s proprietary blockchain platform, the companies are planning to create a fan community that enables investors and consumers to help build the next Web 3.0 multi-format content franchise the expands user experiences far beyond the planned animated feature film trilogy; ancillary content will include a spinoff series, NFTs, video games, merchandise, and an original soundtrack.

Inspired by Jules Verne classic “20,000 Leagues Under the Sea,” the first film in the Young Captain Nemo franchise is slated for a late 2023 release. Producer and showrunner Henry Gilroy (Star Wars: Rebels, Star Wars: The Clone Wars, Amazing Spiderman), and screenwriter and executive producer Jeffrey Reddick (Final Destination) have attached as screenwriters. The “Young Captain Nemo” trilogy of novels was written by Jason Henderson, an American writer of comic books, computer games and young adult novels including the “Alex Van Helsing” and the popular comic book series “Sword of Dracula.”

Young Captain Nemo will enable audiences to take on a role beyond passive viewer. Rainshine notes that viewers will be able to connect in a 360 immersive experience to watch, play, invest, buy, and vote. The experience will follow 15-year-old Gabriel Nemo, a descendant of Jules Verne's famous antihero from “20,000 Leagues Under the Sea,” who is determined to protect the oceans and their creatures from polluters, whalers, and poachers one adventure at a time. Together, Rainshine and Animasia will bring the trilogy to a global audience.

“Through this initiative and multi-format content franchise, our goal is to build upon the rich legacy of Young Captain Nemo,” commented Rainshine founder, chairman and CEO Neeraj Bhargava. “We’re very excited to showcase a young person of color as a protagonist in an animated franchise where kids from across the globe can see heroes who look just like them. Combining world-class talent with the best technology, we’re creating a one-of-a-kind experience where fans can own a piece of the franchise through our proprietary platform, RainBlox.”

“We are delighted to build the Young Captain Nemo franchise with Rainshine on such a large scale,” added Animasia Studio, managing director Edmund Chan. “With the collaborative efforts of some of the best minds from the industry and a passionate team, we will deliver the best animated sci-fi series for global audiences. And with the introduction of Web 3.0 elements throughout the project, fans can be a part of the films, from pre-production to the product.”

“Collaborating with Rainshine to build out the franchise ecosystem for Young Captain Nemo has been extremely exciting, and we're starting with a fun action-packed animated feature we think audiences around the world are going to love,” remarked Gilroy. “Having been a ‘20,000 Leagues Under the Sea’ fan since I was a boy, I am thrilled about the fantastic work our team is doing to bring Young Captain Nemo to the screen.”