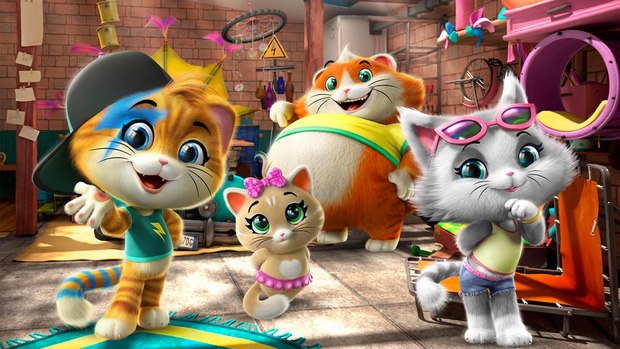 The Rainbow Group’s new property, 44 Cats, will make its U.S. debut on Nickelodeon on Monday, June 10, at 10 a.m. (ET/PT), followed by regular weekdays airings at 10 a.m. (ET/PT). The launch of 44 Cats follows Rainbow’s 2018 agreement with Viacom International to broadcast the series in selected international territories. 44 Cats debuted last year and is enjoying fast growth in both broadcasting and licensing.

The series follows the adventures of four kittens, Lampo, Milady, Pilou and Meatball, who are part of a music band named The Buffycats. The cats live and play in their clubhouse while helping their friends in the neighborhood. Together, they find creative solutions to everyday problems while helping other cats in need. The series celebrates and promotes can-do attitudes and addresses important themes such as diversity, friendship and altruism.

Rainbow Group founder and president, Iginio Straffi, commented, “Nickelodeon is synonymous with quality and excellence in the kids and family content industry. We are truly excited to announce the airing of another Rainbow TV series on Nickelodeon in the U.S. 44 Cats has already proved to be a top-notch show that can work in any territory, and thanks to Nickelodeon’s huge reach, we will be able to bring the overwhelming positive energy of the show to millions of kids in the U.S. too.”