New animated property from Rainbow set to air on Nickelodeon channels around the world beginning in the spring of 2016. 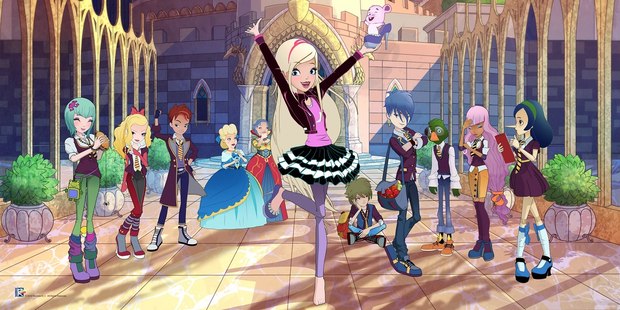 Regal Academy, the exciting new property from family entertainment leader Rainbow, will air on Nickelodeon channels around the world, beginning in the spring of 2016. Regal Academy is a sparkling new series featuring an irresistible mixture of comedy, music and innovative animation techniques. This fresh and funny new show takes the familiar world of fairy tales and turns it on its head through the adventures of Rose Cinderella, a normal girl who suddenly finds herself in the world of Fairy Tales. Here she discovers that Cinderella is… her granny! Rose is enrolled at the fabled Regal Academy where her fellow students include Hawk Snow White, Travis Beast, Joy LeFrog, Astoria Rapunzel and LingLing Iron Fan, all of whom belong to the school’s founding families.

Beginning in spring 2016, kids around the world will be able to delight in the fun of Regal Academy, when it airs on Nickelodeon platforms. The show will also air on RAI in Italy, and many other major broadcasters worldwide are expected to follow after agreements were signed with a number of major broadcasters worldwide at the recent MIPCOM entertainment content market.

“We are excited about Regal Academy’s huge potential,” says Rainbow Group COO Joanne Lee. “We have worked for more than five years to ensure the highest quality animation and, with Nickelodeon as our distribution partner, we are confident it will delight children around the world!”