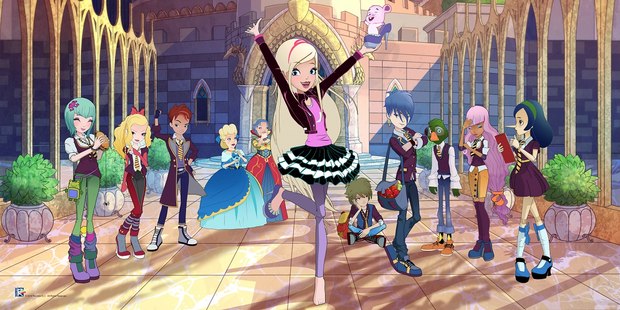 LONDON – Rainbow has announced a major boost to its partnership with TV Cultura, the Brazilian independent free-to-air network. Following the success of Rainbow’s popular and long-running series Winx Club, TV Cultura, which broadcasts to Sao Paulo and, through affiliates, nationwide, has signed deals to broadcast two exciting new Rainbow shows: Regal Academy and Maggie & Bianca Fashion Friends. The two shows will launch on TV Cultura in December 2016 at prime time.

With a target audience of tweens aged 9-14 and kids aged 6-11, Maggie & Bianca Fashion Friends is Rainbow’s first all live action show. The show tells the story of Maggie, an ordinary American girl with a dream of becoming the world’s greatest fashion designer. She gets her chance on her 16th birthday, when she becomes the youngest contestant ever to win a two-year scholarship at the Milan Fashion Academy. There she meets Bianca, a self-proclaimed Italian princess and together they discover secrets that will change their lives. Series one is already completed. Series two is under way. Maggie & Bianca Fashion Friends is the first-ever live action drama series to appear on TV Cultura.

Regal Academy is a sparkling new series featuring a mixture of comedy, music and innovative animation techniques. This fresh and funny new show takes the familiar world of fairy tales and turns it on its head through the adventures of Rose Cinderella, a normal girl who suddenly finds herself in the world of Fairy Tales. Here she discovers that Cinderella is her granny! Rose is enrolled at the fabled Regal Academy where her fellow students include Hawk Snow White, Travis Beast, Joy LeFrog, Astoria Rapunzel and LingLing Iron Fan, all of whom belong to the school’s founding families.

Andrea Graciotti, Head of Sales TV Series, Movies & CoProduction of Rainbow Group, commented, “The enormous popularity of Winx Club has paved the way for the arrival of Regal Academy and Maggie & Bianca Fashion Friends in this vast market. I am delighted that the success of our partnership with TV Cultura has encouraged this major player in the Brazilian market to strengthen its relationship with Rainbow. I am sure that TV Cultura’s young viewers will love these original, innovative and, above all, entertaining new shows.”