The third Winx Club movie, ‘The Mystery of the Abyss,’ will hit cinemas worldwide beginning in September. 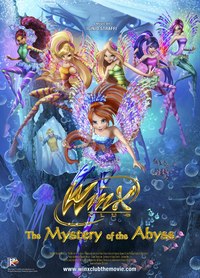 Rainbow has announced that the third Winx movie -- The Mystery of the Abyss -- will hit cinemas across the world from September.

The Mystery of the Abyss sees the Winx fairies in an adventure on the land and in the water as they face their biggest challenge yet. They must battle against the Trix and the evil nymph Politea, who are on the brink of becoming more powerful than ever before -- and only the Winx can stop them.

This magical movie is being released as part of the celebrations to mark the tenth anniversary of the hugely popular Winx Club brand, which has been delighting audiences around the globe for a decade with family friendly storylines, fashionable themes and beautiful animation.

The film will have its world premiere in Italy in September, before being released in Turkey and Russia in October. Territories across the world will follow throughout the rest of 2014.

“We are hugely proud of this new movie -- it looks stunning and is an exciting adventure the whole family can enjoy,” says Iginio Straffi, creator of Winx and founder and CEO of Rainbow. “Not only will the release delight the millions of Winx fans across the world but it also offers a wonderful opportunity to our licensing partners, who can benefit from the buzz surrounding the movie and the marketing and media activities that will form part of an extensive promotional campaign.”