Ink Global signs a new broadcast deal in Italy for ‘Masha and the Bear’ spinoff. 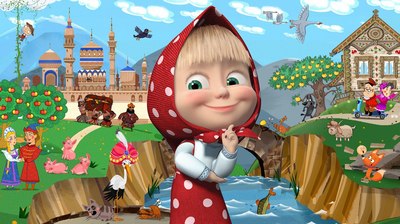 LONDON -- Ink Global has announced that Masha’s Tales, a new spin-off from one of the world’s biggest kids shows, Masha and the Bear, will be broadcast across Italy thanks to a new deal with Rai YoYo.

The series is the work of Animaccord, the Russian studio behind Masha and the Bear, and sees the adorable but hyperactive Masha regaling her toys with her favourite stories, but of course reinventing them to fit her own unique take on life. The series is set to launch on Rai YoYo in Q1 this year.

Masha and the Bear is also broadcast in Italy by Rai YoYo, as well as almost every other country in the world, via both pay and free-to-air channels. The show was named best animation in the Creative Talent category at the 2015 Kidscreen Awards. Broadcasters include France TV, KIKA, Turner Cartoonito (UK and Latin America), Turner Boing (Spain), ABC (Australia), Canal Panda (Spain and Portugal), Minimax (Central Europe), Russia 1 (Russia and CIS), SIC (Portugal and Portuguese-speaking Africa) and SpaceToon (Middle East, North Africa and Malaysia).

“We’re delighted to be extending our relationship with Rai YoYo so that Italian children will be able to enjoy Masha’s Tales,” commented Ink Global Director Claus Tømming. “It’s a beautiful show that combines wit, warmth and humor and I’m sure it will be a big hit in Italy.”