New cartoons and innovative programs announced at the Cartoons on the Bay festival provide a rich selection of programing for preschoolers to teens. 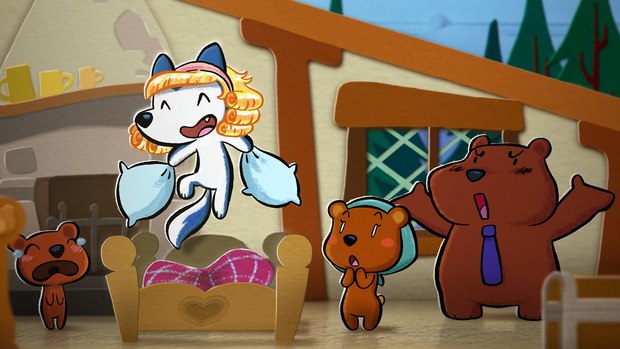 ‘Tiny Bad Wolf’ is an Italian-French co-production between Maga Animation and the Parisian Xilam.

Rai Ragazzi has announced a new line-up of co-production titles, introducing the selection on the last day of Cartoons on the Bay, a festival dedicated to children's animation and television. The cartoons were developed for Rai Yoyo, the most popular children's channel in Italy. Rai Gulp, which is aimed at children aged between 8 and 14, offers innovative original productions which has confirmed their place as a leader in Italian programing for children.

Klincus is about an orphan boy who lives in a city built on trees. Created by Piedmontese author Alessandro Gatti and illustrated by Matteo Piana, the series is based on the book series published by Mondadori.  Klincus, animated in CGI, has been brought to Rai Gulp, by Showlab of Turin and Grid Animation (former co-producers of the Rai TV series Yoyo).

A modern look at Alice in Wonderland, Alice & Lewis follows the adventures of a 6-year-old girl who has found a magic key that opens a door to a parallel world: Wonderland. Here Alice meets Lewis, a very tender bunny. Despite the strange and humorous Queen of Hearts who reigns over Wonderland, Alice loves going there to play with Lewis and her friends. The series consists of 52 11-minute episodes made by Italian MoBo, (a new company that brings together Studio Bozzetto and Movimenti Production of Milan) in co-production with the French studio Blue Spirit Productions.

Tiny Bad Wolf is an Italian-French co-production between Maga Animation and the Parisian Xilam. The young wolf named Lupin dreams of being a fairy tale hero. Lupin is fed up with the fact that wolves are always the bad guys! Thus, he sneaks into fairy tales and assumes the identities of heroes, convinced that he can do things just as well. Although things always go wrong, Lupin is willing to learn from his mistakes.

A new series for Rai Gulp is Berry Bees, with three girls who lead a seemingly normal life, at least when they are not working to save the world on behalf of the BIA. BIA is a secret agency that has chosen the girls to go on the missions in which adult agents cannot intervene. Produced by Atlantyca and taken from the book series published by Fabbri Editore, the cartoon is action filled and features mysterious criminals, international conspiracies and intrigue. ‘Lampadino and Caramella’ includes narratives, structured subtitles, interpreters of sign language, graphics and an animation style designed to be non-invasive and allow accessibility to all children including those with disabilities such as deafness, blindness and autism.

Added to these titles are two particularly innovative projects in production for Rai Yoyo. Lampadino and Caramella, the first cartoon, perhaps in the world, accessible to all children. Twenty five-minute episodes each designed by Animundi. Thanks to the collaboration of structures specialized to support different sensory disabilities, the show includes narratives, structured subtitles, interpreters of sign language, graphics and an animation style designed to be non-invasive. The elements allow accessibility to all children including those with disabilities such as deafness, blindness and autism.

Giù dal Nido (Down from the Nest), is the first 360 degree production experiment of Rai Ragazzi, produced by L&C. On Rai Yoyo it will be a delightful series featuring a blue bird that must learn to fly. In non-linear mode such as Rai Play Yoyo, the series will be seen 360 degrees, an innovative technology in which the viewer choses the framing. The product is extraordinary: a video in which the viewer becomes the main actor.

The new series will run side by side with classics which will come with brand new adventures. These included 52 11-minute episodes of Barbapapà The New Series, an international co-production by Rai Ragazzi created by the French studio Normaal animation in collaboration with Alice and Thomas Taylor. Twenty years after the last animated series Barbapapà The New Series aired, the new production will bring the values of the characters, with lessons on ecology, to the children of today.

In co-production with Sergio Bonelli Editore, is the animated TV series Dragonero which was born from the comic novel by Luca Enoch and Stefano Vietti. This is already a successful comic strip for kids, Dragonero Adventures, and has grown to include the parallel series Senzanima sold in bookstores.

There are numerous animated series produced in collaboration with the Rai Ragazzi editorial structure being made ready for broadcast. Fifteen years after the first series, a new adventure awaits the Winx which brings back the famous fairies created by Iginio Straffi. It is now celebrating the 15th anniversary of the first broadcast on January 28, 2004.

Ricky Zoom is a new series from the creators of Peppa Pig, a Rai Ragazzi production with eOne and the Italian studio Maga Animation. A new two-wheeled world for preschool children that promotes friendship and teamwork. It will air in September on Rai Yoyo with 52 episodes of 11 minutes in CGI.

A series on Leonardo da Vinci, five hundred years after his death, is set in Florence in 1467. Leo da Vinci tells the adventures of the young Tuscan artist and scientist and his friends Lisa and Lollo. The three will have to stop the largest conspiracy ever hatched in Florence against the Medici. An international production of the Alcuni in co-production with Rai Ragazzi, HR, Cosmos Maya, All Rights Entertainment directed by Sergio Manfio, soon to be programmed on Rai Gulp.

In autumn Rai Gulp will also receive the eccentric and grotesque group of friends of OPS-What a Hopsrible Pack! a new series by Studio Campedelli with Movimenti Production and Cosmos Maya. Albein, the protagonist of OPS is a 7-year-old boy with the intelligence of a Nobel Prize winner but who is unable to walk. He and his friends become the Hopsrible Pack, a unique and inseparable group, a little over the top, but with the same emotions of all children. ‘Ricky Zoom’ is a new series from the creators of Peppa Pig, a Rai Ragazzi production with eOne and the Italian studio Maga Animation.

Inside of a range of products designed to encourage the learning of English by younger children, Rai Yoyo will present Fumbleland. A program that narrates the adventures of a class of children struggling with the fumbles (spelling errors). Each episode sees the crazy and unpredictable teacher Mrs. Spelling (Teresa Pascarelli, author and protagonist) struggling with a different fumble in each episode.

Dixi Simple Songs, a musical cartoon in both Italian and English, features the tender white elephant created by Andrea Zingoni (T- Rex Digimation). There are 13 2-minute episodes in which Dixi and his friends face adventures based on the lyrics of well-known songs, arranged to give the episodes the appropriate sounds for preschool children.

A portal for the presentation of new projects for children will soon be online where anyone can present their ideas. Luca Milano, director of Rai Ragazzi, has also announced the launch of a "call for proposal" for specific projects aimed at animation studios and producers. The first call concerns a cartoon TV special with a theme on social value, consistent with the editorial lines of public service, aimed at school-age children.

A second call, to be launched in May, will include projects by young authors under the age of 30 with the aim of creating products to help children grow up while having fun while stimulating imagination, curiosity, a taste for beauty, illustration, and for music. Rai projects have always worked with large and small budgets alike, using the most diverse animation techniques or live action in an effort to involve an even a wider audience.