Award-winning series for kids developed and produced by Radical Sheep Productions set to premiere in the U.S. on July 5th on Disney XD. 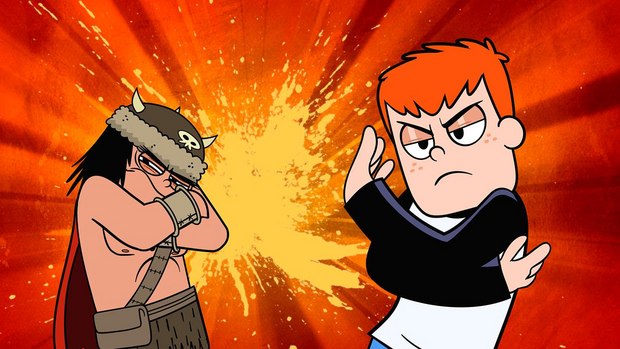 TORONTO -- Disney XD will premiere the animated kids’ series Fangbone! in the US on Tuesday, July 5th at 12:30pmET, with new episodes weekdays through Friday, July 15. Fangbone! is developed and produced by Radical Sheep Productions, a division of Boat Rocker Studios.  Based on New York Times Best Selling author Michael Rex’s graphic novel series Fangbone: Third Grade Barbarian, Fangbone! follows a young barbarian warrior from Skullbania who travels to our world with the mission of protecting the toe of Venomous Drool from being reunited with its master. With the help of his new friend Bill, Fangbone embarks on a quest to outwit Drool’s minions.

Fangbone! stars Taylor Abrahamse (The Stanley Dynamic, George of the Jungle) as Fangbone and Colin Doyle (Murdoch Mysteries, Flashpoint) as Bill. The pilot episode received the 2015 Kidscreen Award for Best One-Off Special to TV Movie in the Kids category, the 2015 Writers Guild of Canada Screenwriting Award for animation and the Youth Media Alliance Award of Excellence for Best Television Program, Animation, Ages 9-14.

“Fangbone! has been a labor of love for us for several years now and debuts with many awards already under its belt,” said Michelle Melanson Cuperus, series executive producer and President, Radical Sheep. “Michael Rex’s graphic novels are a treasure and the entire cast and crew on this project is a dream team. I can’t wait for the viewers of Disney XD to enjoy it as much as we do.”

“Working with Radical Sheep has been the most rewarding creative experience of my life. They treated my stories with respect and integrity, and have kept me closely involved at all times. The writers have done an excellent job of expanding the ideas in the books,” said Michael Rex. “I’m excited to share the show with kids all over the US.”

Fangbone! is executive produced by Michelle Melanson Cuperus of Radical Sheep Productions, Michael Rex, Simon Racioppa, Richard Elliott and John Leitch. It was developed for television by Racioppa and Elliot who also serve as series showrunners. Susie Grondin serves as Supervising Producer and the series is directed by Dave Barton Thomas and Joey So.

Fangbone! first aired in Canada on Family CHRGD on March 22, 2016, with much success. DHX Media serves as series distributor and has sold the show to Disney XD channels in the US, Latin America, South East Asia and Taiwan.