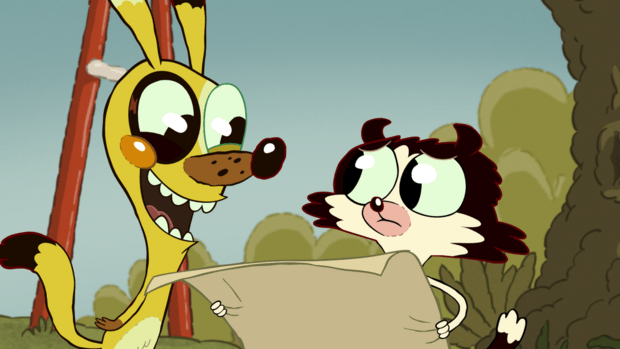 Toronto, Canada -- Corus Entertainment’s TELETOON has commissioned the animated comedy series, The Bagel and Becky Show from Radical Sheep Productions for their 2016/2017 slate. Production has started on 52x11 minute episodes of the animated series, based on the book Bagel’s Lucky Hat by Dave Cooper, co-creator of Nickelodeon’s PIGGOATBANANACRICKET.

The Bagel and Becky Show is a bugged-out, offbeat comedy for kids 6-11, that follows a mismatched brother (Bagel the dog) and sister (Becky the cat) duo as they explore their neighbourhood of Awkward Hills and stumble into whackloads of outlandish situations.

“We look forward to working with Radical Sheep Productions and bringing the whimsical tales of Bagel and Becky to life through this animated series,” says Athena Georgaklis, Director of Original Content at TELETOON.

In a deal brokered by Serious Lunch, BBC Worldwide have acquired the World rights (excluding Canada) in all media to The Bagel and Becky Show. “This is a great partnership for BBC Worldwide, we have huge aspirations for The Bagel and Becky Show and can’t wait to help unleash it upon the world,” says Henrietta Hurford-Jones, Director of Children’s at BBC Worldwide.

“The Bagel and Becky Show is a super charged, full of energy show. And production is underway carrying that excitement into each episode,” says Michelle Melanson Cuperus.  “We are thrilled to be supported on our creative journey by TELETOON and BBC Worldwide and we are excited to see Dave Coopers’ Bagel and Becky take the world by storm.”