‘Frankie Comics’ creator to serve as first artist in a series of traveling Cartoonist-in-Residence events throughout San Francisco in 2016. 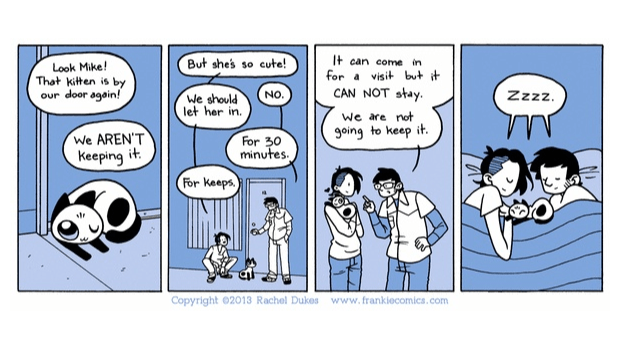 SAN FRANCISCO -- On January 9, 2016, from 1pm-3pm, Cartoon Art Museum will host a family-friendly event in beautiful Fort Mason exploring the creative process of cartooning with Rachel Dukes and creative possibilities with FLAX at their new location, 2 Marina Boulevard.

Rachel Dukes will be the first Cartoon Art Museum Cartoonist-in-Residence since the museum vacated its gallery space at 655 Mission Street, and will be the first artist in a series of traveling Cartoonist-in-Residence events in 2016.  These events will be held throughout San Francisco in 2016 at creative institutions like FLAX, Comix Experience, Mission: Comics & Art, and Two Cats Comic Book Store.

Dukes creates inviting and emotive works through the use of simplified lines and shapes, and will have completed works on display to introduce this artwork to FLAX patrons. Comic books, prints and original pages from Steven Universe, Garfield, Frankie Comics and more will be available to peruse and purchase.  Other assorted and adorable cat merchandise from Frankie Comics, including, but not limited to, stickers, buttons, and belts will also be available for sale.

Rachel Dukes is a MFA graduate from The Center for Cartoon Studies (2013) who self-publishes online comics and mini-comics. Dukes's most popular title, Frankie Comics, is a series of jokes and short stories about living with a cat named Frankie.  The comic is currently syndicated online at frankiecomics.com, GoComics, and Tapastic, and has been featured in cat-themed “listicles” all over the web. The mini-comic editions of Frankie Comics come out twice a year and are sold in indie-friendly shops across North America.  Frankie Comics #1 was a winner of the 2013 Art Exchange program by Marc Calvary.

In addition to self-published work, Dukes also draws comics for Boom! Studios, including Garfield and Steven Universe, and Silver Sprocket, including As You Were, and is a regular contributor to anthologies and fanzines by other indie cartoonists. Dukes is also secretly working on their first graphic novel, slated for a 2017 release.

The Cartoon Art Museum regularly hosted professional cartoonists in its galleries on a monthly basis as part of its Cartoonist-in-Residence (CIR) program. During their closure, they will be hosting talented artists at community partner locations around the Bay Area. Visitors can see cartoonists at work and engage with them directly while cartoonists are able to promote their latest projects and passions.