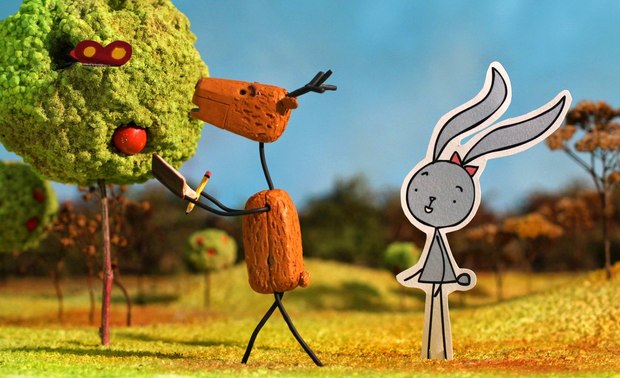 Rabbit and Deer is an innovative look at the use and mixture of 2D and 3D: the film of Péter Vácz, graduate of Budapest’s Moholy-Nagy University of Art and Design, uses the change of dimensions as a unique tool of storytelling. The animation, which mixes the use of drawings and puppets won 120 awards worldwide from Special Mention at the Young Director Award in Cannes to the Best Animated Short at the Nashville Film Festival, and now it is finally available on Vimeo for public viewing.

What happens, when a two dimensional deer and a two dimensional rabbit meet a three-dimensional Rubik cube? That’s the question that didn’t leave Vácz alone, and the young artist created an animated short film telling the story of the animal friends and the magic cube. Rabbit and Deer are living happily and careless until their friendship is put to the test by Deer's new obsession to find the formula for the 3rd dimension, inspired by a Rubik-cube. After an unexpected accident Deer finds himself in a new world, unknown to him. Separated by dimensions the two friends have to find the way back to each other.

“I came to the two characters which were inspired by my previous relationship -- the Deer was me,” Vácz says. “I think many people do it as well, imagining what kind of animal you look like. You start realising that she looks like a rabbit or she has these characteristics and then you’re just stuck with these alter egos or avatars. That was kind of the game, it just gave us another way of communicating with each other. Then slowly as I started to put together the elements of the film, the story, it just found its way to the 2D and the 3D, and the two characters and how this difference describes their relationship. - says director Péter Vácz about the concept.”

The full length film that is finally available on Vimeo was one of the contenders of the recent  Highlights of Hungary 2014 event organized by Super Channel, a privately funded non-profit body that commissions 10 professional curators each year to nominate their favorite grass-roots creative initiatives to a public voting exercise.

Péter Vácz was born in 1988 in Budapest. He graduated from Moholy-Nagy University of Art and Design in Animation BA and MA with his films called Streamschool and Rabbit and Deer which has won over 120 awards at international festivals, including the precious Grand Prix at ANIMPACT and the Junior Jury Award at Annecy. He attended ASF - The Animation European Production Workshop, and took the Professional 3D Character Animation Course in Denmark. Since 2013 Péter is represented by the London-based production company Picasso Pictures and is currently based in Berlin.