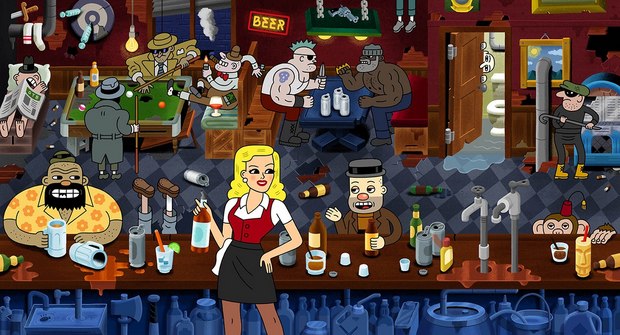 The Adventures of Drunky follows a barfly (Rockwell) in the middle off a cosmic bet between God (Tambor) and the devil (Coogan) over the fate of the Earth. Drunky, with his life destroyed, must travel through Heaven and Hell to rescue the girl he loves (Arianda) and save the world. Assisting Drunky on his quest are an alley cat (Tyler The Creator) and a demon (Attell). The supporting cast includes Abby Elliott, John Leguizamo, Jon Glaser, Jay Pharoah, Noel Wells, James Adomian, Larry Murphy, Rachel Butera and Randy Pearlstein.

The Adventures of Drunky is being directed by Aaron Augenblick from his original concept, with the screenplay written by Augenblick and Aaron Bergeron. Lisa Thomas and Kris Wollinger of Augenblick Studios will produce along with James Belfer and Daniel Shepard of Cartuna, which recently produced the Sundance Film Festival special jury prize winner NUTS! Peter Lengyel and Adam Belfer are executive produces.

“The Adventures of Drunky is everything I love about cartoons,” says Augenblick. “It's hand drawn, surreal, and funny as hell. As a full-length, animated, adult feature, The Adventures of Drunky marks a new trend in independently produced animated features for adult audiences and will be the first animated feature film ever produced in Brooklyn, NY.”

Augenblick Studios is also behind the Comedy Central animated series Ugly Americans, as well as MTV’s Wonder Showzen, Adult Swim’s Superjail, and Fox TV’s Golan the Insatiable. The studio’s 2006 short film Golden Age was an official selection of the Sundance Film Festival and won the grand prize for best film at the Ottawa International Animation Festival.

The Indiegogo campaign to raise funds for storyboards and the actual animation for The Adventures of Drunky went live on Tuesday, April 26, and runs for 30 days. With a flexible goal of $100,000, the campaign has already raised more than $13,000 in just four hours.