Seth Green and Jon Favreau to executive produce new show based on creators Eric Towner and John Harvatine IV’s over-the-top short featuring a car, a truck and a deer. 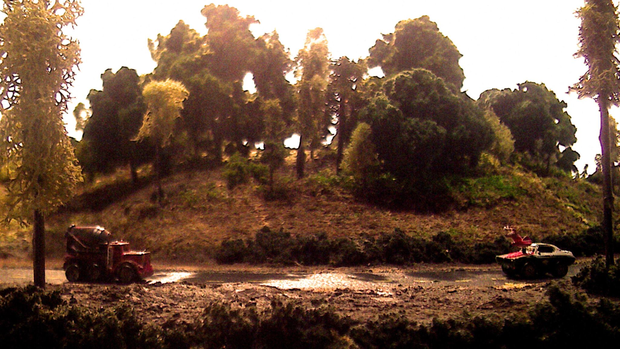 Quibi just announced some “smashing” plans to bring stop-motion shorts to the mobile masses with the greenlight of Micro Mayhem, an animated series from Stoopid Buddy Stoodios and eOne. Created and executive produced by Eric Towner (Robot Chicken), Micro Mayhem is a “dialogue-free grindhouse action series” of wild, stop-motion shorts that showcase a host of original iconic cars with as much personality as they have power. We expect many will crash. Horrifically. Check out the short below: “Micro Mayhem brings to life the car chases I imagined as a kid, and combines my love of technology and stop-motion artistry,” said Towner. “We’re thrilled to be teaming with Golem Creations to bring this dream project to life.”

According to Greg Clayman, Senior Vice President, New Platforms and Strategic Partnerships, Film and Television, at eOne, “Quibi’s focus on micro storytelling provides the perfect platform for Micro Mayhem. We are excited to work with Eric and his team at Stoopid Buddy Stoodios, to bring this wild ride to audiences one turn at a time.”