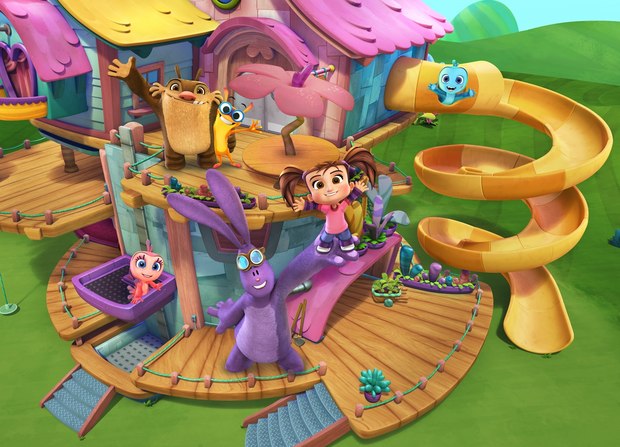 LOS ANGELES -- When you produce over 20,000 frames of fully rendered animation a night, every night, a delay of even minutes can be critical. To maintain its edge in today’s competitive broadcast market, international animation powerhouse DHX Media relies on Qube!, PipelineFX‘s intelligent render management system. Thanks to Qube!’s scalability, DHX can use every machine at its disposal to ensure that shows like The Deep are delivered on time. And thanks to PipelineFX’s innovative new metered licensing policy, it doesn’t pay for the extra software licenses for a minute longer than it has to.

Formed in 2006 by the merger of Canadian production companies Decode Entertainment (Waybuloo, The Hoobs) and The Halifax Film Company (Lunar Jim), DHX Media has grown to become one of the key players in children’s television, now employing over 1,300 staff in 15 cities worldwide. Through the acquisition of firms including Cookie Jar, WildBrain and Nerd Corps Entertainment, DHX Media is now the owner of the world’s largest independent library of children’s content, including such major international brands as Teletubbies, Yo Gabba Gabba!, and In the Night Garden.

As well as producing its own animated series, which include Slugterra, Canadian Screen Award nominee The Deep, the company operates its own suite of TV channels, recently signing a five-year deal with DreamWorks Animation to produce and distribute 130 episodes of original animated children’s content. And to unify all of those disparate productions, DHX Vancouver relies on a single render management system: Qube!.

“DHX Vancouver had been a long-time user of Qube!, and when Nerd Corps was acquired, it was time to consolidate under one render farm management solution,” says Joshua Bretag, Senior Pipeline TD at DHX Media. “Being the industry-leading solution, Qube! was the obvious choice.” DHX uses Qube! with a wide range of software, including Harmony and Flash for 2D animation, Maya and V-Ray for 3D animation, and NUKE for compositing, even integrating it directly with Shotgun for asset management, along with RV for media playback.

“Thanks to Qube!’s powerful command line tools and Python API, we are able to integrate more than just our rendering,” says Bretag. “In fact, we generally push any heavy computational task through it. That includes publishing shots, scripted scene assembly and automated Playblasting.”

Given DHX Media’s intensive production schedule – the company consistently produces around 13 minutes of fully rendered animation a night – a rock-solid render management solution is also essential. “When you have as tight a schedule as we do, even two hours of downtime can take days to recover from,” points out Bretag. “Thankfully, we can rely on Qube! clearing by the morning.”

In order to meet such tight deadlines, DHX Media can call on all of its hardware resources: as well as its 228-node in-house render farm, plus additional nodes in a local private cloud service, they also co-opt hundreds of artists’ workstations as temporary render machines overnight.

This is where PipelineFX’s new metered licensing policy comes into its own. The system, introduced as standard with the release of Qube! 6.9 in October 2016, enables users to rent extra software licenses on demand. Unlike other similar systems, there is no need to pre-pay – and best of all, clients are only charged for the time the extra machines are actually in use, right down to the minute.

“Metered licensing has been imperative to our operation,” says Bretag. “We currently have a wealth of workstations that would otherwise site idle at night. For minimal cost, we can utilize these machines, charging this as an operational, rather than capital, expense.

DHX Media also uses the metrics that Qube! generates in order to maximize its production efficiency. “We are developing more tools that will change how we bid, and allocate costs to shows” says Bretag. “This is made possible by features such as CPU time reporting and job tagging for different departments.”

Thanks to Qube! and PipelineFX’s metered licensing policy, DHX Media has been able to preserve its competitive advantage in today’s global broadcast market. Qube!’s winning combination of stability, flexibility and scalability enables DHX to push boundaries, secure in the knowledge that frames will still be delivered on time. And by using metered licensing, the company can wring every last CPU hour of power from its hardware and bill clients right down to the minute. “For too long, rendering has been a black box, constrained by capital budgets - studios have either under-quoted for it, or been unable to substantiate their quotes,” says Troy Brooks, VP Technology at DHX Media. “As we move forward under increasing budgetary pressure, we need more insight and flexibility to manage the whole process, and rendering is a key performance indicator. With tools like Qube!, we can finally optimize this process.”

Qube! is an intelligent, mature and highly scalable render management solution that can be quickly integrated into any production workflow, and is backed by world-class technical support. Qube! delivers intelligence to production pipelines by providing business-critical insight into render pipelines, maximizing investment in rendering infrastructure and automating manual processes. Qube! works out of the box with all leading content creation applications and is truly cross-platform with all software components available on Windows, Linux, and Mac OSX operating systems.

Metered licensing is available now and billed by the minute at the equivalent rate of 10 cents/hour. Users are billed at the end of the month and only charged for what they use. This is the third licensing option available to Qube! users, complementing perpetual and subscription licensing.