Polish animator and indie director Michal Socha talks about his influences, his process and his new couch gag for The Simpsons. 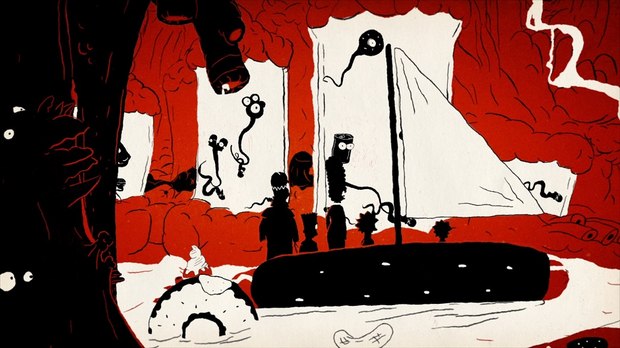 Pushing the boundaries of animation, Poland’s indie animation director Michal Socha takes viewers on a fantastic journey inside Homer's body with an all-new Couch Gag created to kick off this Sunday’s episode of The Simpsons, “What to Expect When Bart’s Expecting.” The new episode airs Sunday, April 27, on Fox at 8/7 Central.

Produced at ACME Filmworks, the gag is reminiscent of the hyperkinetic graphic style Socha employed for his 2008 short film, Chick.

“We had a blast creating this couch gag,” comments ACME’s Ron Diamond. “It epitomizes Acme's success in producing unexpected animation by independent animators who are pushing the creative boundaries of ads, TV and film.”

Watch the gag, and check out the Q&A with Socha, below:

Were you a Simpsons fan before this project began? What are some of your favorite elements of the series? A range of big-name filmmakers have participated in the Simpsons universe in a variety of ways, many of them directing their own couch gag sequences. How does it feel to have your work alongside that of artists such as Bill Plympton, John Kricfalusi and Guillermo del Toro?

Such an opportunity doesn’t happen very often, to make couch gag for The Simpsons. I feel very delighted that I could design and direct my own couch gag. This couldn’t happen without help and support of Acme Filmworks producer Ron Diamond.

What are some of your biggest design influences? What about animation?

The biggest design influence for me is Saul Bass and his great title design. Working on the script for the couch gag, we were also inspired by films like Fantastic Voyage directed by Richard Flecher and French animation Once Upon a Time…Life by Albert Barille.

Please describe your creative process -- for instance, do you usually work alone, or do you tend to thrive in a more collaborative environment?

I usually work with my two brothers, older Bartek and younger Kuba. The creative process also looks the same, after few days of thinking on idea, we meet together and have a brainstorm [session]. Usually it brings some results. Although your film Chick appears to be made with traditional 2D animation, much of it was actually completed in CG. How does the choice of tools influence your storytelling?

My film Chick was a mix of 3D and 2D animation. The choice of tools did not have an influence on the storytelling at all. It can only help you to achieve final result much faster.

What was the origin of the idea for your couch gag?

After watching around five hundred couch gags, we didn't have [an] idea how to start. It was challenging to find something fresh and new, but thankfully we have come up with few raw ideas. The origin of the idea for "inside" couch gag was just two simple drawings: Family laying on the couch. Tomato slice fells down from the top of the screen, then cheese, ketchup and top of sandwich. Big hand grabs sandwich with family, and we see that it is Homer that eats family sandwich. (In the Polish language, ‘sandwich’ and ‘small couch’ have almost the same meaning.) It was too short for a couch gag. We have to ask questions [about] what could happen after? We have found [a] whole bunch of ideas [about] what could happen inside the body of Homer.

What made you decide to go with a mix of 2D and 3D?

3D gives us best result for animation and builds storytelling very quick. At the beginning, we thought that we could animate the Simpsons Family with classic frame-by-frame technique. After couple of tests, we have found that we are not as good 2D animators as we thought! Our tests tended to lose character and proportions, [and] that was not acceptable. In this case it was very important that each black silhouette reminds you of Homer, Bart or Lisa. Classic frame-by-frame technique could take much longer to finish couch gag. We wanted to keep this animation in 2D style, [which] is why we mixed those two technique to achieve a better result. Your film Chick has been described as hyperkinetic – how much of this sensibility did you bring to this project?

There is a lot of sensibility from Chick like colors, mood, and sense of humor, but kept in [the] reality of The Simpsons series.

What was the largest technical challenge for this project? Were there issues you hadn’t anticipated? How were they handled?

One of the challenging issues from[a] technical point of view was to reach [the] non-3D look of the characters. We tested a lot of different renderings that give us cartoon look, but none of them were sustaining us enough. That is why we decided to [manually] repaint all the frames frame-by-frame and add extra secondary animation. There was a lot of fun work to do, but finally it give us desired effect.