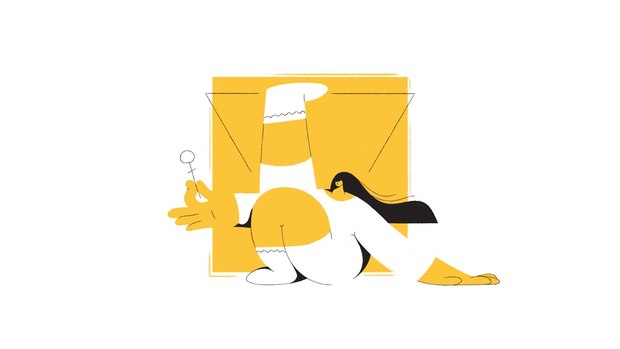 Punanimation was initially formed in 2015 as a Facebook group with the aim to empower, promote and connect women, trans and non-binary people working in the largely male animation and motion industry, sharing advice and disseminating their work among friends. The group transformed into a fully-fledged platform on International Women’s Day this year to promote the work of their community and shine a light on some of the incredible non-male talent working in a “boys club” environment. Punanimation’s community stands at 2,600 members and growing, while their online directory hosts more than 200 diverse illustrators, animators and motion graphics designers working across the industry. They regularly organize meet ups, talks and screenings.

Co-founders and friends Linn Fritz, Bee Grandinetti and Hedvig Alhberg have curated an exhibition of work at Pocko’s Dalston gallery in London to celebrate the brilliant motion and illustration talent they have assembled in the Punanimation directory. They will be presenting a selection of work from their members reimagining the Punanimation logo in their own styles alongside a series of animations, with private viewing available beginning September 6, 2018 from 6:00-9:00PM.

“Even though the three of us came from different backgrounds, we were equally frustrated with the lack of diversity and representation in work environments -- and all the complications that come with those,” state Fritz, Grandinetti and Alhberg. “Although we were originally just three, today our whole community is built by over 2,600 people from all over the world, working within the many different fields and specializations of animation and motion graphics.”