The Psyop team uses Fabric Engine to digitally knit a bunch of realistic sweaters in time for the holiday season. 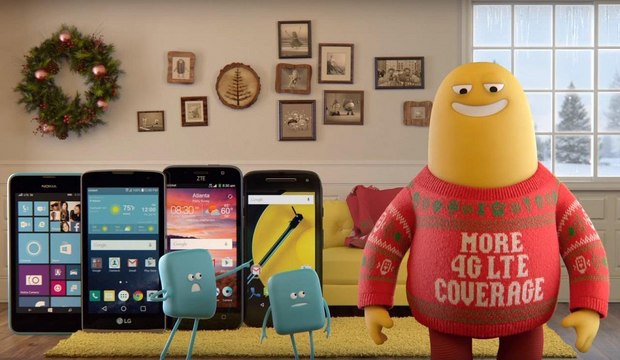 What do you get if you cross a sheep with a kangaroo? A woolly jumper, according to the classic kids’ joke. It wasn’t quite that simple for the team at Psyop who were commissioned by advertising agency Argonaut to make a 30-second holiday spot for Cricket Wireless featuring several woolly jumpers.

The Psyop team used Fabric Engine to digitally knit a bunch of realistic -- albeit comic -- sweaters in time for the holiday season.

The brief was pretty clear, according to Psyop producer Stephanie Gocke. “The client, Argonaut, wanted to go with the gag of huge holiday sweaters -- the quintessential holiday sweater with graphics -- with the character all bundled up in many layers, taking one sweater off at a time,” she said.

Each sweater features a key message but at the beginning of the project, it wasn’t clear how many messages -- and therefore sweaters -- would be required. On top of that, the team had about 10 weeks to produce the whole spot -- and really only four weeks for the effects-heavy part of it. “That posed a challenge because we had to figure out how to achieve this and to a certain extent, we were entering unchartered territory,” says Gocke.

“As far as getting believable woolen knit goes, we learned from previous experience that there’s a world of difference between making something out of fibers and making it out of polygons with displacement normal maps etc.,” Friedman said. “Because of this, we wanted to try out the idea of making entire sweaters from fibers and see where that went.”

Using Fabric’s KL language and Canvas, the visual programming system in Fabric Engine 2, Friedman set about building a knitting -- or entwining -- tool while the rest of the team was in preparation mode. “Was I under pressure to build the tool? Yes -- and I had to predict how long it was going to take,” he said. “The good thing is we already had a lot of the underpinnings for it in the form of my hair system [also created in Fabric Engine] so that helped a lot. We’d also already made a similar tool in ICE, albeit on a much smaller scale, that allowed us to know what to expect.”

Each sweater is made entirely of fibers, Friedman stressed. The system creates a knit pattern, starting with just one fiber per yarn, then it wraps strands around other strands to create ply yarn. “At the end, each yarn is made out of about 30 or 40 fibers and all of the frizz is organically coming out of the hair,” said Friedman. “Where you can see through it, it’s the result of the differences in density of the geometry being generated. So what you end up with is something that’s way more believable and has a lot better properties as far as rendering goes.”

“Each of the sweaters has about 50 million hair segments or so, once everything is generated,” Friedman added. “Fabric generated the complete geometry for that in about 20 seconds -- or about 30 seconds if there was motion blur. That amount of density of hair in this kind of set up is not something we’d have attempted in ICE so it’s a little difficult to make exact performance comparisons -- we scaled this to a level that we simply wouldn’t have tried otherwise.”

It’s also difficult for Friedman to be precise about how long it took to build the tool because there are several components to it that he was building anyway, such as an Arnold procedural for converting hair geometry, but he said it was “perhaps three weeks before people could start using it and another two weeks before it was really good.”

The main user of the tool was CG lead/CG supervisor Kyle Cassidy. From his point of view, with little experience of proceduralism -- he’s a Maya guy -- he found the tool remarkably easy to use. It took him two to three days with Friedman working alongside him “to get comfortable with using Canvas” and after about a week and a half he was “pretty much self-sufficient.”

“It’s important to note the geometry of the sweaters themselves was the simplest part -- once you have the geometry properly laid out to work with the Entwiner tool, these things are almost instantaneously set up -- it’s just connecting things within Canvas to these actual pieces of geometry and the Entwiner takes care of the rest,” Cassidy said. “I like to say ‘Jonah built the bus, I just got to drive it’!”

The client loved the results -- appreciating the realism and attention to detail, to the point where the weave inside the sweaters differs from the outside, exactly as it would in real life. “I think, when you do this kind of thing, when you commit to an extreme -- and almost unreasonable -- level of honesty in terms of how you’re making this thing, you end up finding these happy accidents like where the yarn is transparent and the light is coming through it, and things like that -- it’s just stuff that happened as part of the process. That, I feel, is the major advantage of using Fabric Engine,” Friedman said. “It’s fun to do things in a really unreasonable way and get results that totally justify what would have seemed insane at the start.”

Cassidy admits he only had a broad understanding of Fabric’s capabilities at the beginning but has a very different perspective now that he’s seen it in action. “It really opens up my mind to the possibilities of where this whole avenue is going,” he said. “I’m really excited to see where Fabric is going to take this industry, and Psyop as well. There are so many applicable uses for it, your imagination can just run wild.”