Psyop wins the Grand Prix for Coca-Cola ‘Man and Dog’ at the Stuttgart Festival of Animated Film competition for applied animation in the field of advertising, spatial communication and technology. 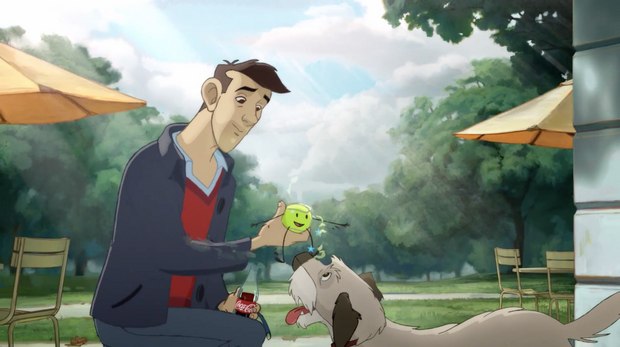 Coca-Cola: Man and Dog
(Psyop/Coca Cola Company, USA 2015)
The jury has found that:
“In the computer-animated world of today, this spot is a rare piece. While it was inspired by traditional animation and drawn by hand, it plays with new depth and dimensions. This has resulted in a small piece of art, combining the techniques and styles of several generations of animated film. A simple story – a man walks his dog – thus makes a shift in perspective possible which can change the world.”

Loteria: Night Shift
(Passion Pictures/ Loterias y Apuestas del Estado, GB 2015)
The jury statement:
“It’s great cinema: “El Gordo,” the world’s biggest lottery -- an eagerly anticipated event with 46 million participants, taking place before Christmas every year. The story, the characters, the set-up as well as the whole craftsmanship of the animation have resulted in a wonderful way to tell a modern-day Christmas story. With values we all associate with our day and age, and which we all benefit from: the joy of sharing. Advertising should always be this moving.”

Assassin’s Creed: Syndicate
(Digic Pictures/Ubisoft, Hungary 2015)
A dialogue straight from the jury meeting:
“What a Moloch... Such dark characters... Oh no, the poor horses... But they’re just animations... But that fellow over there, he’s real!... No!... Not real, for real?... No, he’s also animated... But these guys, they’re real!... Noooo!... Really?... It’s all animation, and that’s the reality! And because it all looks so incredibly realistic, it has really deserved the award in the technology category.”

Lapp Connected Award by U. I. Lapp GmbH

The Animated Com Award has been presenting prizes in its various competition categories since 2011. This year, two special awards have been added: “Future needs derivation – communication and networking in a digital world” by the Mercedes-Benz Museum, as well as the “Lapp Connected Award” by U. I. Lapp GmbH. In addition, prizes honoring entries from the German-speaking region will be awarded for the first time in the Spotlight Animated Com category. This is owed to the successful continuation of the collaboration with the Spotlight-Festival für Bewegtbildkommunikation, which was established in 2015. The Spotlight Animated Com awards ceremony takes place on April 30, 2016 at Staatsgalerie Stuttgart.

“I am really glad,” says Dittmar Lumpp, Managing Director, Organisation & Finances of the Stuttgart Festival of Animated Film, “that we have succeeded in establishing applied animation as part of the festival over the years. As a result, it was also possible to call the advertising industry’s attention to the potential that animation has.” Prof. Ulrich Wegenast, the festival’s Managing Director, Programme adds: “Through intensified cooperation with the Spotlight Festival, we intend to create an even stronger interlink between the fields of moving image communication and animation, resulting in a unique event format for the advertising industry.”

The prize sponsors of the Animated Com Award 2016 are the Mercedes-Benz Museum, the U. I. Lapp GmbH, Mack Media GmbH, and the Animation Media Cluster Region Stuttgart. Partner of the event are netzwerk P production, Hansgrohe, Ilg-Außenwerbung, and KlickPiloten.