Psyop teams with creative agency BFG on a combat-soaked trailer for Supercell’s game of strategic chaos, Clash of Clans. 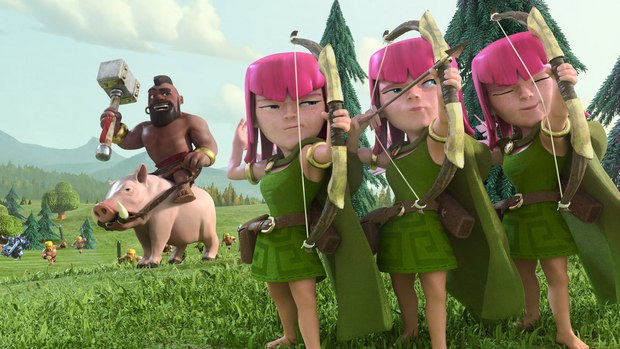 Psyop and creative agency BFG got in the action with this combat-soaked trailer for Supercell’s game of strategic chaos, Clash of Clans. “Anthem” drops viewers in the middle of an all-out war to show what an intense round in the bedlam is all about.

“We really embraced the bright, stylized and saturated look of the game,” noted Psyop Director Fletcher Moules. “We wanted to fully conceptualize what the world would look like if we were running alongside the horde of barbarians, what would it feel like to be covered in their saliva.”

The Psyop team worked closely with BFG to bring the mayhem to life, developing the characters and creating dynamic backgrounds and environments to keep the explosive and goofy nature of the spot intact while maintaining the game’s intrigue.

“The scene with the giants became a favorite,” added Moules. “It added the heart and the warmth that was only achieved when we removed ourselves a little from the ruckus to enjoy it from their perspective.” Psyop also worked to find the middle ground of the narrative—striking the right balance between action and comedy, determining where to use gags, feeling out how long to feature each character and determining how many explosions were necessary but not overwhelming. In total, the team created 88 shots during previs which were ultimately cut down to the final, tumultuous 20.

“This job gave us a chance to flex the muscles of our new pipeline quite a bit,” commented Psyop CG Lead Stephen DeLalla. “Heavily customized and developed tools let us iterate quickly and try different cameras, actions and shots without much lag time.  It was really amazing to watch a scene go from zero to 80% completion in a couple of clicks! and even more so because Psyop built it that way.” The video released on Monday, December 23rd and grabbed 4.5 million YouTube views within the first 24 hours, totalling over 14 million in one week. During production, Psyop even formed two warring Clash Clans and the triumphant cry of "hogriddddaaaaa" could be heard resonating throughout the studio, adding a level of entertainment all its own.

“Of course we had to visualize the Clash characters and world at ground level!” smiled Moules. “This is what we do at Psyop. Character animation with a great story, and if it’s quirky or funny, then all the better!”