The streamer shares first looks from the sophomore season of its irreverent adult animated comedy, which returns June 10 with 8 all-new episodes; the show follows four middle school friends in a timeless struggle to be cool in LA. 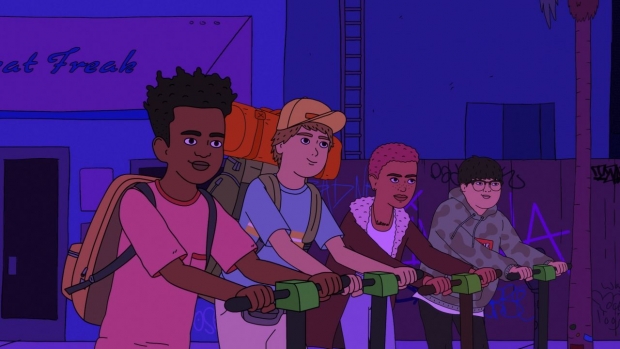 In the new season, the gang of four middle schoolers is back with more misadventures in their never-ending quest for clout on Fairfax Avenue in Los Angeles - the pulsing heart of hypebeast culture. The series focuses on the timeless struggle to be cooler than you are, to fit in while standing out, and what it feels like to wait in line for a pair of sneakers you’re never going to cop.

The series is created, and executive produced by longtime friends Matthew Hausfater, Aaron Buchsbaum, and Teddy Riley. Additional executive producers include Jon Zimelis and Jason U. Nadler for Serious Business (@midnight); Peter A. Knight (BoJack Horseman); and Chris Prynoski, Ben Kalina, and Antonio Cannobio for Titmouse (Big Mouth). The artist Somehoodlum, who designed the characters for the series, serves as a consulting producer alongside the pop/internet culture clothing and media brand Pizzaslime.